A Pint of Lager, A Case of Deja Vu and Two Packets Of Crisps

Yesterday, I was out looking at a flat in the west-end. After checking out the place, I went for a walk around the neighbourhood, and after checking it out, wandered farther afield. I walked for nearly 45 minutes before wandering into a pub on Gloucester Street called the Gloucester Arms. I ordered a pint and started looking at the menu. Looking around, something seemed really familiar about the place. The set up of the tables, the weird angle of the one wall, the flat screen TVs mounted high on the walls.

"Do I know this place?" I wondered. It seemed unlikely, I hadn't been out this way in ages. In fact, I hadn't been in this area of town since moving to London.

In August of 2007, though, I was in the area. I stayed at a hotel just a 10 minute walk away, and once I realized that, I knew when I had been here before. 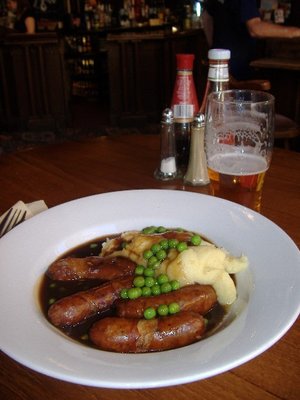 It was here that I had my bangers and mash in August of 2007. In my blog entry for my trip to London, I wrote about the pub meal I had at the Gloucester Arms after being told that food in North America was bad for you.

The next day, I ordered bangers and mash in a pub. I am not certain that 4 sausages with a side of potatoes flooded in gravy is exactly health food, but who am I to argue with the nutritional expertise of a drunken drywaller in a London pub.

I skipped the bangers this time, and order the Chicken Kiev, and reflected on the fact that some times that old familiar feeling is because you have been some place before, it just takes a minute to remember it.

It's good you kept it healthy this time around. Happy last day of workday freedom!