I died in hell - They called it Passchendaele

The Third Battle of Ypres, or the Battle of Passchendaele - visiting a rebuilt Ypres, the Passendale Memorial and Tyne Cot Cemetery

The final of my entries on my trip around the World War I battlefields of Flanders. The Brooding Soldier in Flanders' Fields looks at the start of the war and the Second Battle of Ypres. A Young Nation Mourns Her Dead published on April 8th, 92 years less a day from the battle, looks at the Battle of Vimy Ridge and the Canadian National monument that stands on the battlefield today. This final entry, I died in hell - They called in Passchendaele looks at the Battle of Passchendaele and the end of the war.

The Battle of Arras, of which the Vimy Ridge assault was one of many offenses, came to an end in mid-May. While some progress had been made pushing into the German lines, no major breakthroughs had been made. The war settled back into the trench warfare stalemate that had characterized most of the previous 2 years.

The attack had left a bulge in lines where the British and French forces were surrounded on three sides by German troops. This is known as a salient, and the danger with a position like this is that the Germans could attack near the back of the salient, cutting off a large portion of troops and stranding them without supplies.

In June of 1917, the British offensive started, its goal to take the village of Passendale, just a few miles from Ypres. The battle, which lasted for months, would become known as Third Battle of Ypres. It also became known under another name, the Battle of Passchendaele, with an old Dutch spelling of the name of the town used. 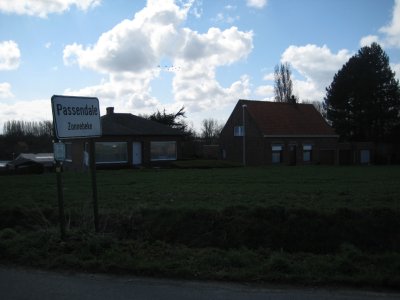 The offensive did not go to British plans from the start. By this point, the land was ravaged, and stripped of all greenery to hold the soil together; the fields had become mud bogs.

“There was not a sign of life of any sort. Not a tree, save for a few dead stumps which looked strange in the moonlight. Not a bird, not even a rat or a blade of grass. Nature was as dead as those Canadians whose bodies remained where they had fallen the previous autumn. Death was written large everywhere.”
- Private R.A. Colwell, Passendale, January 1918 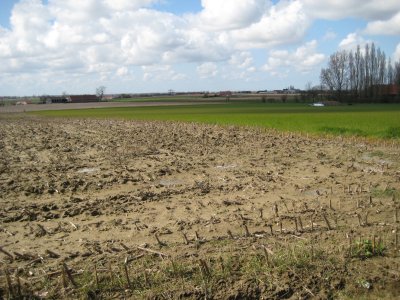 For four months the British and Colonial troops practised a bite and hold strategy, making small gains and then hunkering down to hold the position. The fighting was awful, with tanks getting stuck in deep mud, and soldiers even drowning in it.

“We could not believe that we were expected to attack in such appalling conditions. I never prayed so hard in my life. I got down on my knees in the mud and prayed to God to bring me through.”
- Private Pat Burns, 46th Canadian Infantry Battalion, Passendale, November 1917

On the 6 November 1917, the Canadian Corps took the town of Passendale, ending the battle.

“Then on October 30, with two British divisions, the Canadians began the assault on Passchendale itself. They gained the ruined outskirts of the village during a violent rainstorm and for five days they held on grimly, often waist-deep in mud and exposed to a hail of jagged iron from German shelling. On November 6, when reinforcements arrived, four-fifths of the attackers were dead.”
- Source Veteran Affairs Canada website

The entire enterprise had achieved very little. Both sides suffered incredible loses, and while disputed it is possible that the Allied forces suffered even heavier losses than the Germans.

Many of the dead are buried in nearby Tyne Cot Cemetery. The cemetery is the largest Commonwealth cemetery for war dead in the world, with almost 12,000 men buried there. In addition, a memorial contains the names of another 35,000 men who died and whose final resting place is unknown. 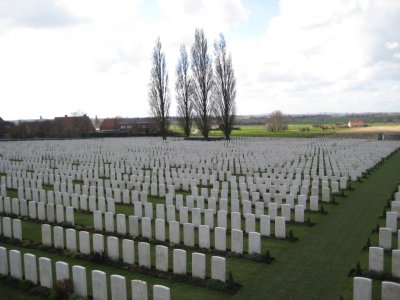 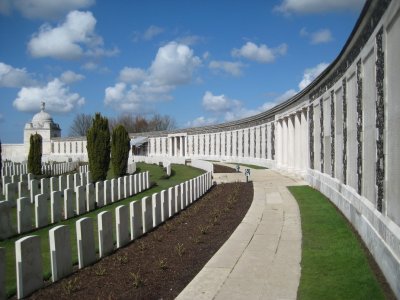 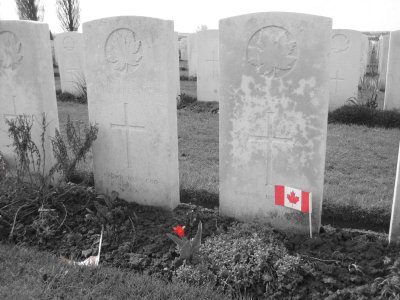 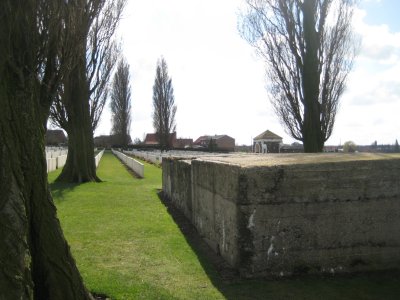 Within Passendale itself, which is a nice little countryside town, is a memorial to the Canadian troops who took the town. At the end of Canada Lane is a small stone in a well maintained garden that has an inscription that reads.

THE CANADIAN CORPS IN OCT.- NOV. 1917 ADVANCED ACROSS THIS VALLEY THEN A TREACHEROUS MORASS - CAPTURED AND HELD THE PASSCHENDAELE RIDGE 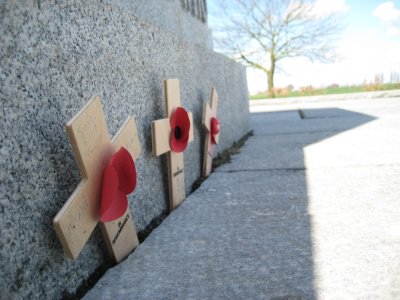 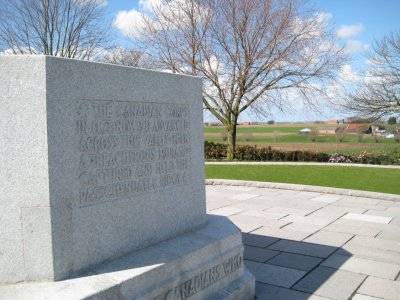 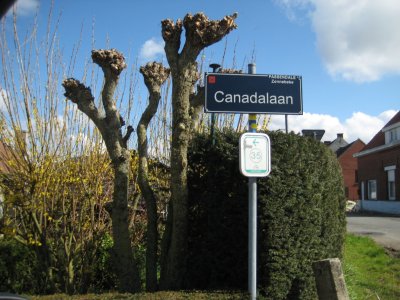 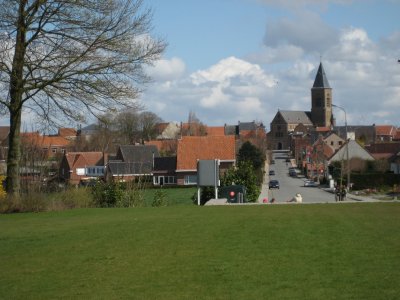 By the end of 1917 a number of events had unfolded that would dramatically shape the rest of the war. The French morale had dropped to an incredible low, and they decided to take up defensive positions against the Germans. This left burden of pushing against the Germans to the British and her Commonwealth allies. However, the United States congress had declared war on the Germans, and while there wasn’t a massive army immediately available, the Americans started to mobilze. The Germans, meanwhile, had signed a truce with the Russians, thereby freeing up all the troops on the Eastern Front to move to the Western Front.

In the Spring of 1918, the Germans launched an offensive to try and end the war before the arrival of a large number of American troops. The German offensive was successful, pushing to with 120 kilometres of Paris.

"Every position must be held to the last man: there must be no retirement. With our backs to the wall, and believing in the justice of our cause, each one of us must fight to the end."
- Field Marshall Earl Haig, Order of the Day, 12 April 1918.

It is during this time that my Grandfather entered the war. He had enlisted back in 1916 (despite being too young to enlist), but wasn’t mobilized until April of 1918. He was in a logistics unit, and was stationed somewhere in France. He wasn’t in France for long. A train he was unloading was hit by a bomb dropped from an aircraft. Injured, he managed to make it away from the scene and found shelter until he was discovered. He was returned to London to recover. He had been hit with shrapnel, and had a large wound on his thigh. Throughout his life small pieces of the shrapnel that was still in his leg would work their way to the surface of his skin, coming to the surface as small black marks.

My Grandfather, living in Great Britain and not Canada, would of course not fought with the Canadian Corps had he been deployed to the front. He didn’t come to Canada until 1920, when he moved to Toronto. I never knew him at all, as he died before I was born.

In August of 1918 the Allied forces launched a counter-offensive, and made major gains. By October, it had become clear to the Germans they could no longer launch a defence against the armies, and that defeat was imminent. The Germans started negotiating a peace with the Allies, and on November 11, 1918, the Great War officially ended. It was the war to end all wars.

Ypres was mostly destroyed in the four years of the war. The site of so many important battles for the British troops, debate started as to what to do with the site. Some declared that it should be preserved as ruins, a reminder of the ferocity of the fighting that occurred there. Others declared that great monuments should be built.

“I should like us to acquire the whole of the ruins of Ypres… A more sacred place for the British race does not exist in the World.”
- Winston Churchill, Minister of War, January 1919

The residents of Ypres had other plans, of course. They returned home, and started rebuilding. Like the farmer strolling across the field in Vimy, their life continued and they got on with it. While the politicians debated about the appropriate memorial, the citizens of Ypres rebuilt their town, including rebuilding the Cloth Hall (the medieval trading market) and the Cathedral to their former glory. 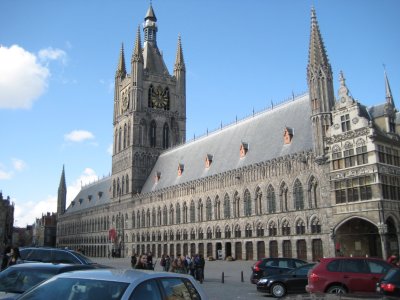 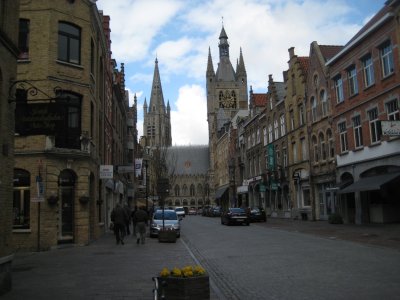 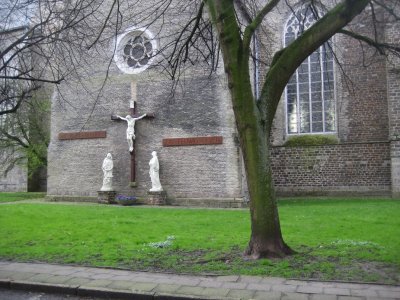 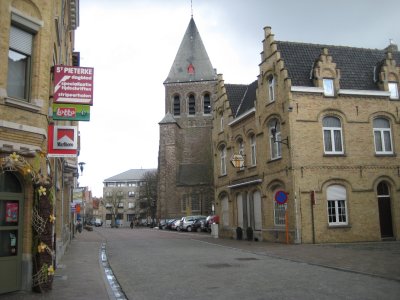 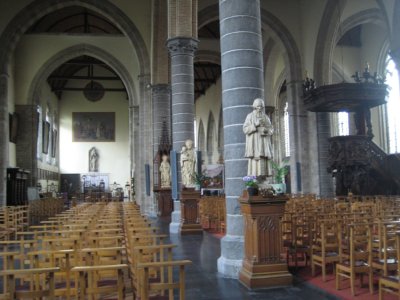 Cemetery and Farm Outside Ypres: 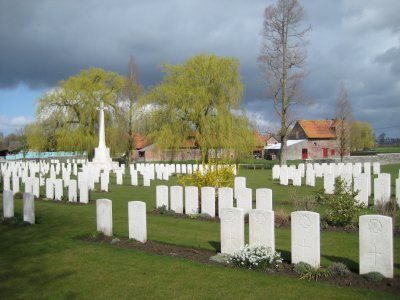 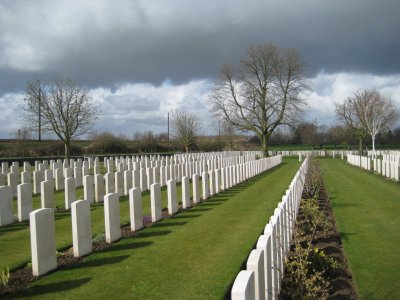 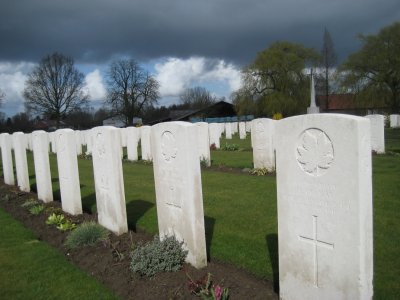 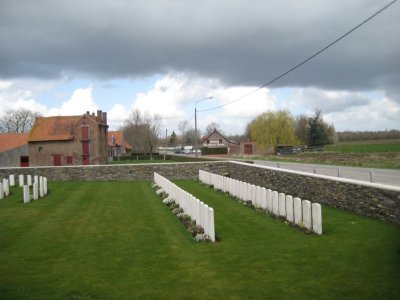 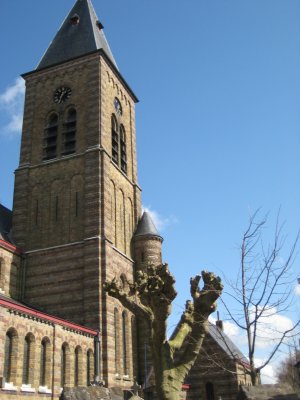 “In February and March, the return began in earnest. I arrived at Dikkerbus on Wednesday, 17 May 1919. I found 200 people there, who were living where they could. Some had been able to make their house or stable habitable. First they had to work for days in order to move away the earth or wood, because shelter had been made in them. Sometimes they received a little help form the Chinese labourers or German prisoners. They used a few planks to hide holes in the walls, and the best ones to repair the roof. Most people, however, had built huts for themselves.

This is how the first inhabitants lived, in poverty, but happy all the same. They had their own homes, and weary with wandering, they were now once again where they belonged, and that was the most important thing.”
- Achiel Van Walleghem, priest, 1919

Life going on. A more fitting tribute to the lives lost I cannot imagine.

As for “The War to End All Wars,” were it only so. In the rebuilt Cloth Hall is the In Flandes’ Fields Museum, from which the majority of the quotes included in these blog entries have come. The museum ends with a counter, currently at 216. 216 is the number of war zones in which the Red Cross has operated since the end of World War I. The display also points out that not a day has passed since November 11, 1918 that some place in the world was not at war.

In Tyne Cot, on the headstone of Second Lieutenant Arthur Conway Young is a message that says "Sacrificed to the fallacy/That war can end war.” 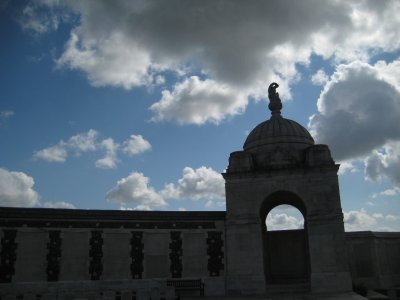