I am going to apologise in advance for this entry, and provide a warning. This is an entry about two train rides from and to places within London, in one case from one point in London right around back to the same place. You might find it dull, but I find riding around on trains endlessly fascinating. It's in my heritage. Anyway, if you find train rides dull, I would suggest you stop reading now.

Still here? All right, you've been warned. You've only yourself to blame now.

I wrote recently about a trip on the parliamentary train from Clapham High Street to Kensington Olympia, and how the opening of a new train service from Clapham Junction to Surrey Quays was allowing this service to close. The new Overground service isn't just closing this (mostly useless) service, but also closing a twice-an-hour service from London Victoria to London Bridge. The Victoria to London Bridge service was closing on December 8th, and the new Overground Clapham Junction to Surrey Quays opens December 9th, so I decided to ride them both. 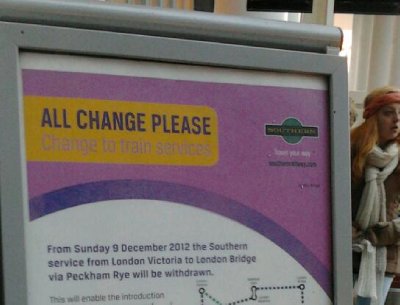 The Inner South London Line was a twice hourly service running between London Victoria and London Bridge stations in central London, servicing Wandsworth and Southwark with a horseshoe service to these two main terminal stations in London.

I headed from Clapham Junction to Victoria to catch the 13:11 departure from Victoria. The train was due to call at Battersea Park, Wandsworth Road, Clapham High Street, Denmark Hill, Peckham Rye, Queens Road Peckham, South Bermondsey and finally terminating at London Bridge. 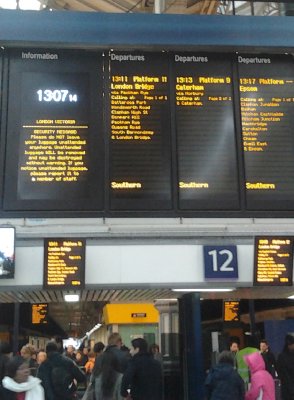 London Victoria has this great logo on the floor telling you to watch what you are doing with your roller bag. Don't be a trolley wally, it says. 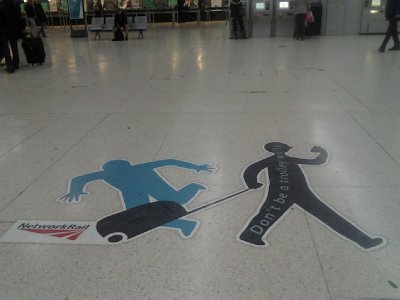 I boarded the service, which is usually a two car train but Southern Rail had put on 4 car trains for the day. There were a few train spotters taking photos (much as I was), and a few people with placards about the service, but there was also a few people who were just taking the train to get where they wanted to go, looking a little bemused at those of us with cameras and placards.

I inadvertently ended up on the same train as the Southwark Rail Users group (SRUG), who were riding the trip a couple time around. They had signs and were taking pictures, and talking to people on the train. The woman I talked to said they weren't protesting, just communicating, though the information they were handing out was titled "South London's Loss".

They were handing out maps they felt better represented the new layout of the train services than the TFL tube maps, which they said don't show how Southwark is connected to central London. I didn't bother pointing out that the TFL tube map doesn't show any rail service other than the Overground, and that most of the new stops weren't on the old London maps. 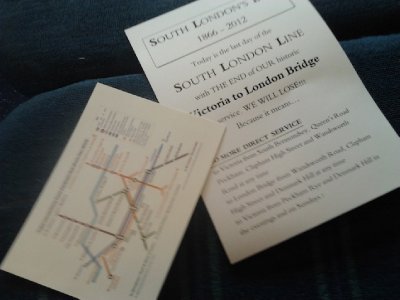 Other than the chat with the SRUG people, the train journey was short and uneventful. 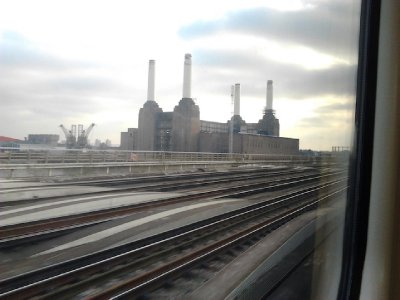 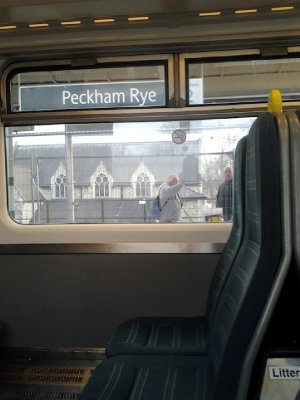 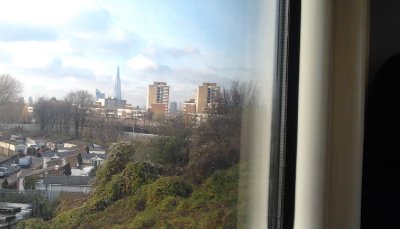 Between Queens Road and South Bermondsey, A view of the Shard

We arrive at London Bridge, and off I get. The station is undergoing a number of improvements, which is one of the reasons that this South London Line service is being discontinued, as platforms in London Bridge station are being closed until 2018. I wander around lost for a few minutes before I find the way to the Underground, passing in the shadow of The Shard, Europe's tallest building. 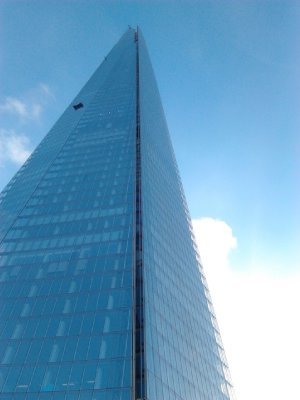 Arrival at London Bridge, walking out to see Europe's tallest building - The Shard

Off I went on the Jubilee line to do some Christmas shopping... For myself... I bought a laptop... at Harrod's. That really happened.

The sun rose on Sunday, and "all change, please," when the old services stop and the new service begins.

The London Overground is a train service run by Transport for London, the local government body responsible for transportation in the Greater London area. In the past few years, TFL has taken on many train services, aiming to create an orbital railway running around central London. The last piece was to put together a link along the southern edge of the city, and a new service from Clapham Junction to Surrey Quays completes the link.

I caught the train from Clapham Junction, catching the 11:52 headed towards Highbury and Islington. There were a few "train enthusiasts" on the train (you could tell by the literature printed off and the cameras), but there was mostly regular rail users, off on whatever commute they were on for the day. 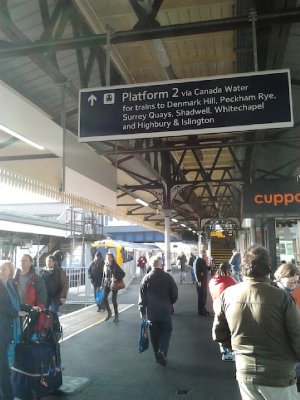 We left Clapham Junction, and slowly made our way along, eventually passing underneath the main rail track and coming up on the previously unused portion of track heading to Wandsworth Road. 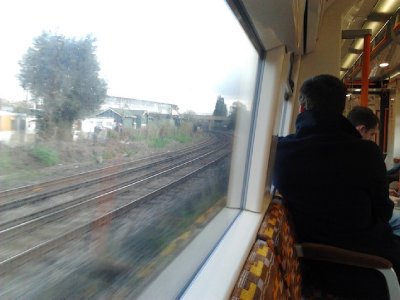 Wandsworth Road and Clapham High Street station, previously serviced by Southern Rail but now only serviced by the Overground, have been rebranded as London Overground stations, with the orange roundel. We pulled into the station, and I noticed a young boy (probably around 12) filming the train as it came in from the north end of the platform. A few minutes later, when we pulled out, the boy had moved down to the south end of the platform to film us pulling out. 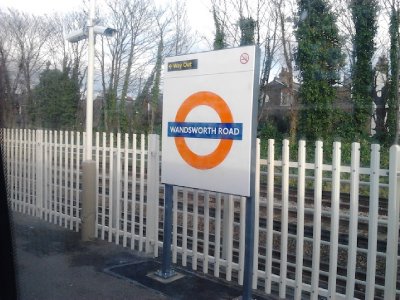 Soon enough the train pulled into Denmark Hill, where I jumped off for a quick rest on my round-London journey. 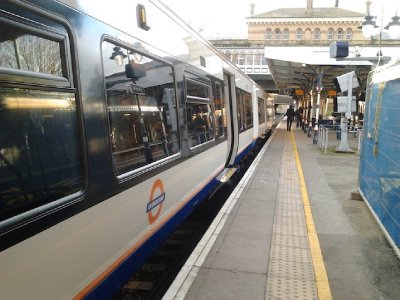 I had heard that there was a decent pub in the Denmark Hill rail station building called the Phoenix. I popped in to the pub, and found an absolutely lovely pub with a massive beautiful clock. I got myself a pint of London Pride ale (decent choice for a train spotter). 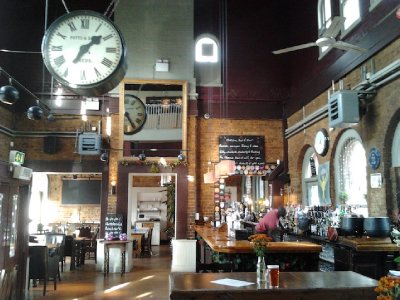 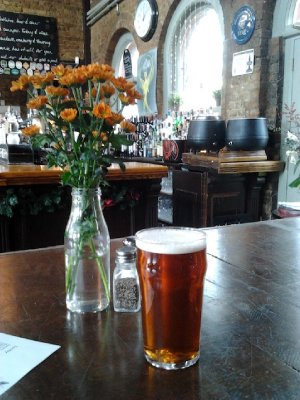 Pint done, and reinforced, I headed back to the station to catch the train and continued my round the city journey. 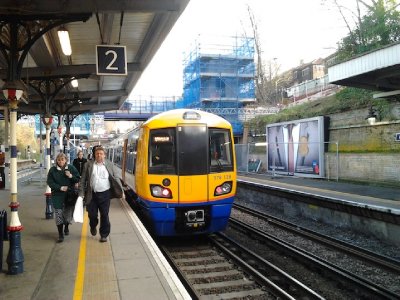 Boarding the train at Denmark Hill, I found a much busier train than the last, with every seat taken, and people having to stand. Pretty impressive for the first day of service.

We pulled out from Denmark Hill and off to Peckham Rye. As we pulled into Peckham Rye, I noticed the same young lad who had filmed us coming into Wandsworth Road filming our train coming in. Arrival filmed, he jumped on the train and as the train ran from Peckham Rye to Queens Road Peckham, he worked his way through the open train to the front of the train, his mother following behind him. 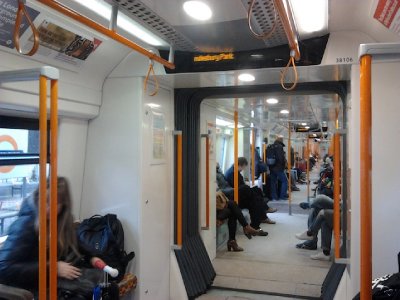 At Queens Road, the lad jumped off, positioned himself on the platform, and filmed us leaving the station. His mother accompanying him must be a patient woman.

I was so busy watching the young boy filming, I missed the arrival of the woman who sat across from me. She soon got my attention, though, as she spent the entire time on the train sobbing to herself silently. Like a good Brit, I looked away in embarrassment. I seem to attract this kind of behaviour, first noticing crying on the Heathrow Connect in August 2009 and then recently on a flight in September where the woman beside me was crying.

We turned north, going over the newest bit of the rail network (actually a reconstructed old bit of the rail network) that connects us onto the line to Surrey Quays. We now had stopped being on the new bit, and were travelling now up the east side of London. We travelled down underground, and eventually under the Thames river in the Thames_Tunnel, the first tunnel built under the river. It was built in the mid-1800s as a pedestrian tunnel. In 1865 it was converted to a rail tunnnel, and other than a few years closure here and there, has been serving London by rail since that time.

We pull up out the tunnels and into Shoreditch, where we get some excellent views of the City of London and the area surrounding Liverpool Street station.

The woman left the train, still sobbing, at Shoreditch High Street, along with most of the rest of the train. A much emptier train continued along the east of the city, and then turned to the west to start along the Northern stretch of the circle.

We pulled into Highbury & Islington, and I decide to take another break, popping out of the station and to the nearby Famous Cock pub, where I take a quick break for the toilet, and then to replenish my liquids, another pint. I had a pint of Spitfire ale and watched the first 30 minutes of the Manchester derby between Manchester United and Manchester City. 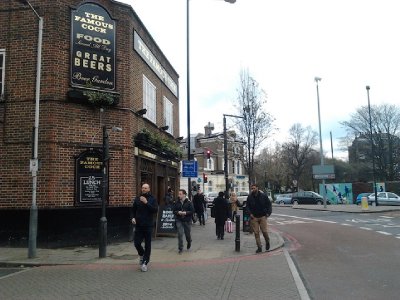 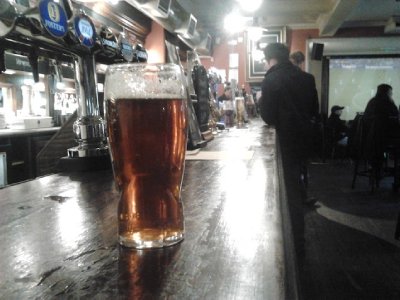 After watching Man U's Wayne Rooney score a soft, rolling goal, I headed back to Highbury and Islington station, and down to the Overground platforms. The next train direct to Clapham Junction (heading west) wasn't for 27 minutes, so I hopped onto a train to Willseden Junction. 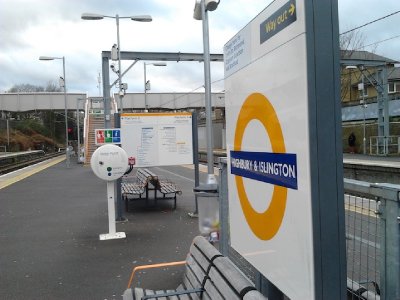 The train journey from Highbury & Islington was uneventful, though busy. This section of the line is well established, so not surprising to see it well used.

I snapped this photo during the journey of a TFL advert for the extension to the south. It promises quicker journeys to the clubs in Clapham, Camden and Hoxton. Given that I live in Clapham, and haven't made it out to the clubs there, I doubt that I will be using the train service to get to clubs in North or East London. 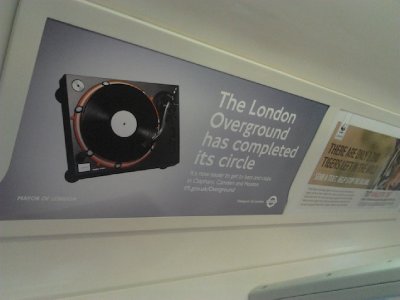 The young Japanese girl who was sitting under the sign looked at me somewhat strangely, but otherwise I was the only strangeness on this part of the journey. Mostly it was young people and families off to wherever they where going for the day.

The train terminated at Willseden Junction, and I wait 8 minutes for the next train to Clapham Junction. The train pulls in, and fills up with people. Other than the bit from Clapham Junction to Denmark Hill, and from Shoreditch High Street to Highbury and Islington, the train has been full on a Sunday afternoon. And not just with train spotters and nerds like me, but with people going about their regular Sunday afternoons. 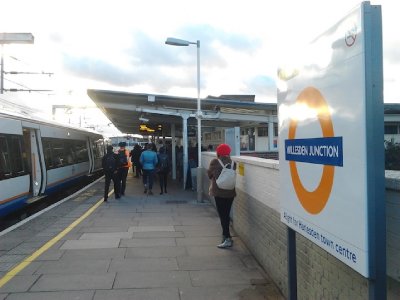 It being Christmas time, and this being a train that stops at Shepherd's Bush station for Westfield Shopping centre, the train was busy with shoppers, either on their way to buy, or at Shebu (what us in-people call Shepherd's Bush) boarding the train with tons of bags.

In amongst that crowd, an older man with large, grey mutton chops also boarded the train. He stood at one end, and listened as the train pulled away from Shepherd's Bush.

The automated train announcement came on. "This is the Overground service to Clapham Junction. The next station is Kensington Olympia," the mechanical, female voice said.

"Olymmmm-Pi-Ahhhh!" the man sung out after the announcement had ended. "Overground... Underground..." he sang, and then stopped singing. The music didn't stop, though, he replaced his voice with a harmonica. Mutton chops played his harmonica until the train pulled into West Brompton, when he pulled his hat down on his head, turned his collars up and left the train. I had expected him to walk through the train asking for change, but he didn't. Simply played his music, and left. 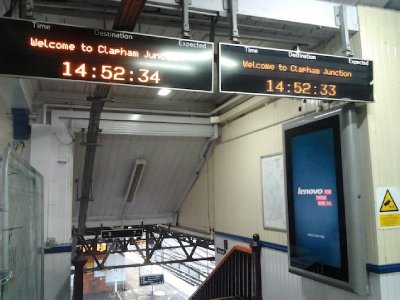 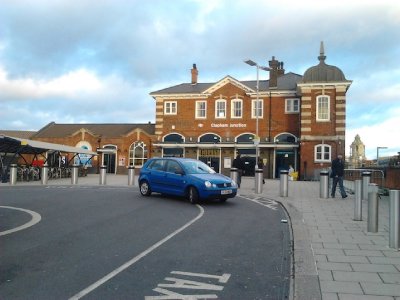 A final pint of the day to celebrate the circle at Windsor Castle pub in Clapham Junction. 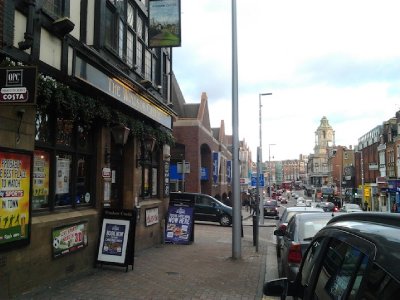 Now, where'd I leave my anorak?