My father, Reg Wesson, died on November 27th of this year. He was 84, and had not been well for the past year. He was admitted to hospital in mid-November, and I flew back to Toronto to be with him and my family. We spent a week together before he passed away.

It is, I will admit, something that I had been both expecting and dreading since I moved to the UK. Moving overseas with an octogenarian parent, I knew at some point I would get that call. As much as you want to pause the hands of time while you are on the road, they keep ticking back home. I most feared a call saying he had died. Every time I spoke to Dad on the phone, I knew that the goodbyes we said before we hung up could have been the last. I was thankful that the call I got allowed me to get back to Canada and say my goodbye in person.

I count myself lucky on two counts, one that I was able to make it home in time to spend some time with my father before he passed, and also that he passed peacefully, without any prolonged suffering. 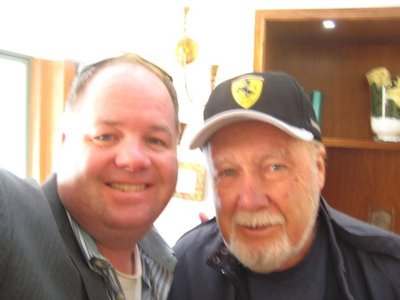 After my father passed, I stayed in Canada for a few more days for the burial and the “Celebration of Life” for Dad.

My dad didn’t want a funeral or a memorial service. “I’ve been to too many god-damn funerals,” he said. “I want a party.” So we planned a celebration, with music and wine and laughter. It was tinged with sadness, of course, but mostly was a great opportunity for people to get together and share memories of my dad.

Despite not wanting a memorial service, we did have a few parts that were memorial-service-like. One such piece was speeches. People wanted to get up and share, either through reciting a poem, singing a song or sharing a favourite anecdote.

I played emcee, and shared a few memories I had of my Dad. I wanted to share some big, life affirming story, but couldn’t really think of anything, so told everyone about the little parts of life I remembered with him. Most of them revolved around trains, actually, which I hope goes some way to explain the recent train nerdiness I have exhibited in the blog. It is (a tribute to / the fault of) my father (pick whichever one you feel best describes your feeling towards the train blog entries).

My sister Jen spoke last, and I was struck by what she said. I paraphrase her here, because (true to my father’s spirit) she spoke without notes and I wasn’t taking a transcript. She said that when she was younger she wouldn’t have described Dad as a brave man. He didn’t especially like heights, and dealt with pain much in the same way I do, by feeling faint and nauseated. He didn’t partake in a lot of physical sports.

Yet as she looked back recently on Dad’s life, she realised her analysis was wrong. As a young man, Dad gave up the safe option of working for his father’s business as he really wanted to work in a bank. Having never been involved in auto racing, he applied on a whim to be part of the Oakville-Trafalgar Light Car Club and took up rallying. Later, he wound up a part of the Canadian Racing Driver’s Association, running Grand Prix and other racing events in Canada. After moving to Burlington, nestled at the edge of Lake Ontario, Dad went out for a walk one day, down to the local yacht club, and though he didn’t have a boat or knew anyone in the club, he joined.

He was a real “give it a go” kind of guy. He was constantly finding new interests, and on finding that interest, he pursued them. He didn’t let the weight of opinion of others influence him, nor the fact he was venturing as an unknown into an area he knew nothing about. He just did it. And in doing so, thrived. For every new club, organisation, interest or career he tried, he became an invaluable part of the group. Often acting as treasurer for groups, or working his way up into the executive. He would immerse himself in his new circle, making new friends, bringing in old friends to his new group, becoming a key part of the social circle.

My dad may not have been physically brave, but he was a brave spirit, willing to put himself out into a new world he didn’t know, and give it a try.

As my sister said this, and I remembered my big, life affirming story about Dad.

It was when I was between high school and university. While in high school I had worked as a waiter at our local Pizza Hut. I was pretty good at it, and saving a good bit of money for university. As summer approached, I decided I was a bit too good for Pizza Hut, and should be working at a more upscale restaurant. So I quit my job without another one lined up. “I’ll quickly find a new job,” I said, confident in my skills.

I didn’t quickly find a new job. I struggled, and even tried to go back to get my old job at Pizza Hut, only to find it was already filled. Desperate, I took a job doing door-to-door sales of … well, anything I could carry – tube socks, books, calculators – this company had the lot.

I hated it. The money was alright, but the job made me miserable. I knew by the end of my first week I wanted to be doing anything else.

My Dad, giving me a ride home from the train station on Friday evening, could see it on my face. “What’s wrong, son?” he asked.

“I hate my job,” I said. “I wish I could quit. It really makes me miserable.”

“You see no way you could be happy at this job, if you changed something,” my Dad asked.

“Quit?” I asked. “I can’t quit. What will I do about money? I need money for university.”

“Don’t worry about the money. We’ll figure out a way to make it work,” My dad said. “You can’t keep doing something that you hate. Son, life is too short to spend it being miserable.”

I believe this was the philosophy that drove that braveness my sister had been speaking about. It is about putting aside those things that aren’t contributing to your fulfilment, and taking up those things that you think may contribute.

Obviously that isn’t the only decision point. My father was not selfish in his choices, he took his responsibilities seriously and if he said he would do something, he would try his best to see it through. But his current responsibilities didn’t hold him back from trying something new, and he didn’t feel the need to be chained to something that wasn’t working for him.

Dad always told me how proud he was of me for having taking the step to move abroad. I had never really understood why he used the word “proud,” until I started to look at it in the context of the bravery my sister described. I think he was proud of the move because it was me doing something daring, striking out on my own and taking a new adventure because I was pretty sure it would make me happy, in much the same way he might have done. In my actions are reflected his lessons and example.

So as we enter 2013, I take the next steps in that journey, in becoming a permanent resident of the United Kingdom, and continuing towards becoming a British citizen. More so, I start to think to myself, over and above the paper work, what can I do to become more integrated into my new homeland? To fully immerse myself in this, as my father had done before in the many adventures he undertook. I may not stay in the UK forever, but if I do leave, I want to leave knowing that I threw myself into my life here with all that I could give it.

I will bravely live this life, and in doing so, hopefully reflect some small part of my father, and honour his lessons and example.