The Nashville South seemed like a decent place to watch the game in San Jose, Costa Rica. The guidebook described it as a ex-pat hangout free of the usual plague of women looking to exchange sex for money. John Lee, Trish Anderson, Dennis Kim and I settled in at the end of the bar to enjoy the game, along with many libations.

The guide book was wrong about the lack of prostitutes, they were there, but pretty low key (compared to say, the Hotel Del Rey). Soon we were joined by other travellers looking for a place to drink and watch. Rock music pumped in the background during half-time, and I was so distracted trying to dance that I totally missed Janet Jackson's breast. So, unlike millions of American's, I have never seen Janet's breast not pixelized.

A newspaper reporter came in and snapped a few pictures. We were in the paper the next day, but my name was spelled incorrectly. 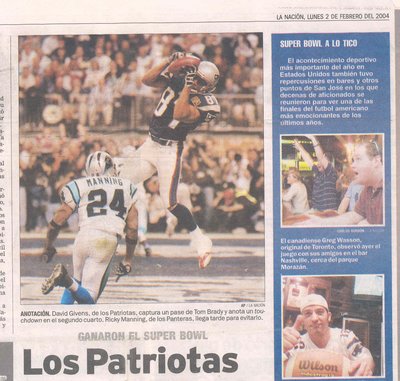 The game? Oh, New England beat Carolina 32 to 29 to take their second trophy in 3 years.