A Tale from Nowhere

Off the beaten track in Zanzibar, Tanzania, Africa

In my job, I spend a lot of time sitting around on airplane and in airports with not much to entertain me. So I tend to use that time to read. I just finished reading a book called Tales from Nowhere: Unexpected Stories from Unexpected Places, a collection of short stories that explores travellers' visits to places that are off the beaten path, places that both make us lonely and free us at the same time.

That got me thinking about the most off the beaten path place that I have been. I suppose the most likely passport stamp that I would have that other North American or European travellers wouldn't have would be Mongolia. However, probably the most obscure place I have been was broken down on the road between Stone Town and Kendwa on the island of Zanzibar in Tanzania. 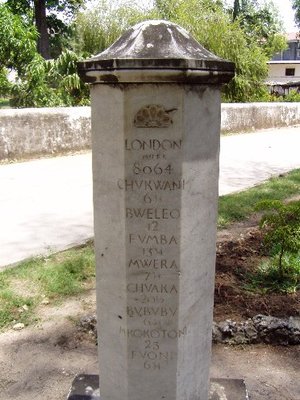 I wrote about my trip from Stone Town to Kendwa back in 2005 when I was in Tanzania, but didn't mention this story. There's two reasons for that. The first is that my blog entry was all about how crumby a day I was having, and this brief interlude of interest didn't fit into the theme. The second reason, and probably more important, was that I didn't know at the time what would stick with me. Often when I travel I find myself thinking one thing about a place during the trip, but years later find myself remembering other things. Now, when I think of Kendwa, instead of thinking about the crappy day of dull spice tours and van breakdowns and broken swimsuit trunks, I think of different things.

I remember trying durian fruit, and having my pee smell like rotting garbage for the next two days. I remember a beautiful french girl staying at the same resort as I, and her tiny red bikini. A better man would have hit on her, instead of I just watching her from afar.

But most of all, I remember the experience I had waiting for that new van.

I was in a van that was on it's way north from Stone Town towards Kendwa. About half way there, the van started making all manner of strange and not healthy sounding noises. We pulled over at some small town garage to have the van looked at, and the van was pronounced dead. We would have to wait a couple of hours for a new van to arrive.

There was myself and a couple from Poland in the van, and we disembarked and hung around the garage waiting for the new van to show. Soon we were surrounded by a gaggle of small children. The woman from the Polish couple actually spoke Swahili, and that amazed the children, who spent most of the time giggling and running away, then approaching close again. They were especially taken with the Polish woman's blond hair, which a few of the braver ones actually touched (at her invitation).

We gave the children some gum, but apparently they had never seen gum before and were unsure what to do with it. We tried to teach them how to chew the gum, but they refused. The van driver explained to us that the only other white people these children would have likely seen would have been doctors, and thus they were suspcious of anything given to them by whites, as it was most likely medicine and thus not very tasty.

Finally the new van arrived, and we set out on our way north again. The children laughed and waved and said goodbye. It was such a nice experience, because so often in Arusha and Stone Town, people approaching and interacting with you are doing so because they are trying to sell you a tour. It was nice not to be the "target" during an interaction for a change, and to let yourself be fully open and unguarded in interacting with the people.