Superbowl 37 at my hotel in Pto. Montt

I'd been down in Chile for around 2 weeks by this point, and despite promising myself that I was going to stay away from everything "North American," ended up having a total hankering for a North American day come Superbowl.

I staked out the TV in the main lounge of my hotel early (wanted to make sure none of the locals put on one of the many soccer games that were constantly running) with a bucket of Kentucky Fried Chicken and a 2 litre bottle of Diet Coke.

Not everything was American, though. The game was playing on ESPN2 in Spanish.

Superbowl 37 featured the Tampa Bay Bucs soundly beating the Oakland Raiders 48 to 21. For once, without alcohol clouding my system, I actual remember the outcome of the game. Sadly I was cheering for Oakland, given that I had just spent the past 10 months hanging around 3 towns South in San Ramon, California.

Well, I am now in my second week in South America. Currently I am sitting in an Internet cafe in Bariloche, Argentina - but I will get to that in a minute.

The trip started (after almost 20 hours of travel from Toronto) with five days in Santiago, Chile. Beautiful weather in Santiago - sunny every day with highs of 30c. I got a wicked sun burn on my forehead though. I can never seem to apply sun screen correctly. They should give a course on that.

Santiago (population 6 million) is like most big cities. It's cosmopolitan and expensive (at least by South American standards). It has interesting things to see and do (museums, winery tours, historic architecture), but is ultimately exhausting. After 5 days in Santiago I was looking forward to going to a smaller, less noisy and dirty place. So I hopped onto an overnight bus to Peurto Varas in the South of Chile.

Imagine my surprise on arriving in Pto. Varas to find that it is raining and 10c! Not at all what I was expecting from South America!!!! Anyway, luckily I had warm and dry clothes to wear. Eventually the temperature climbed to around 15c, but the rain never broke once. Pto. Varas is very nice. Very German influenced. Small town (only about 30,000 people) but right on a beautiful lake and with views of the Andes in the distance.

Yesterday I took a boat and bus trip from Pto. Varas to Bariloche, Argentina. The trip was amazing. We started for an hour long bus ride which included a stop to view some beautiful rapids and waterfalls. Eventually we arrived at Lago Todos Los Santos (Lake All Saints) - apparently named so because it was founded on Nov 1 (All Saints day), but I couldn't get that damn "Never Ever" song by the All Saints out of my head all day...

We cruised Lago Todos Los Santos for about 2 hours. INCREDIBLE! The Andes Mountains surround the lake, rising almost vertically up from the lake. I have never seen anything like it. The mountains in the Andes are like the mountains you draw as a kid, steep and pointy at the top. Very unlike the Rockies in Western North America, which time has smoothed. After the boat ride (and lunch) we went by bus through an evergreen rain forest (it was raining, of course). Mud roads with lots of switch backs cruising up and down the Andes mountains. I think they said the highest point we reached was 2,700 meters. After another couple hours, two more boats and two more buses I arrived in Bariloche.

Bariloche is a ski town in the Andes Mountains situated on a very large Argentinean lake. It reminds me of Kelowna or Lake Tahoe in geography. It is very tourist focused, but not in that corporate way that Vail or Whistler are - just lots of independent hotels and hostels and restaurants. The weather is not much better here than in Pto. Varas. It's a little colder, but at least the sun is out.

And now I must place a pox on all of the Internet information and book-form travel guides that I read. For all of them stated that reservations were not required ANYWHERE, even in the high season, because housing was SO plentiful. I spend from 9:30pm until midnight stopping in EVERY hotel and hostel I saw trying to find a room. Eventually, aching from carrying my pack for 3 hours up and down the hilly streets of Bariloche, I found a place to stay. Only around $CDN 20. Very basic, but at that time of night I just wanted a place to sleep.

Today I have been taking it easy. Booked a bus out of here (again a pox on Lonely Planet for the information that buses were easy to get. The first bus out to my destination I could get was Saturday), found a new hotel and grabbed some lunch. Note to anyone travelling in Argentina. While the "Smoked Venison" sounds like a very fancy and interesting dish, ultimately it is just deer jerky. I imagine the chef in the back with a Ronco Food Dehydrater and a pound of deer meet snickering as I ordered it. At least the beer is good.

Future plans - Hanging around Bariloche for a few days and then to Pto. Montt to watch Superbowl (anyone now how to ask "are you showing the Superbowl" in Spanish) and prepare to catch a boat down the southern fjords of Chile to watch icebergs and glaciers cleave. After that, probably up North again to get some WARM weather again. Probably Buenos Aires for a few days.

I hope everything is good where ever you are. I hear it is very cold in Toronto, so despite it only being 10c here today, I don't feel too bad that I am missing the -15c weather in Toronto. 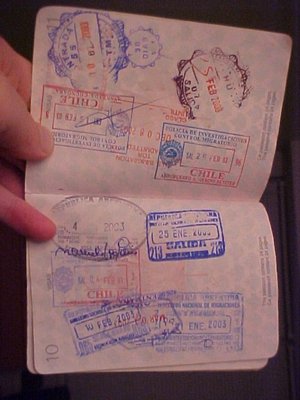