One of the great things about my commute is that, because I work in Central London, I have some awesome choices of commutes. In any commute, I cross the Thames River. I can take a bus from my place which runs through Parliament Square, by Big Ben, and then past Trafalgar Square. Or I can take the train in to Victoria, and get off at Temple tube, walking past Somerset House on my way into the office. The final (and most common) commute, I cross the Thames by walking across Waterloo Bridge to Waterloo train station and then on the way home.

The walk across Waterloo Bridge is amazing, though. To the east is St. Paul's Cathedral and beyond that the city. To the west, Charing Cross, the London Eye and the Parliament buildings.

A couple of weeks ago, crossing the bridge, there was a beautiful, red sunset, creating a gorgeous backdrop for the sites along both sides of the Thames. 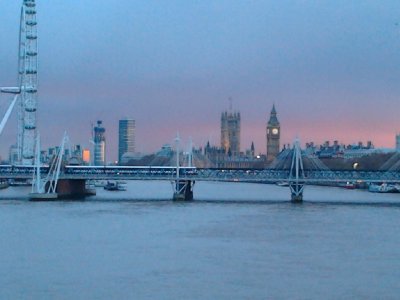 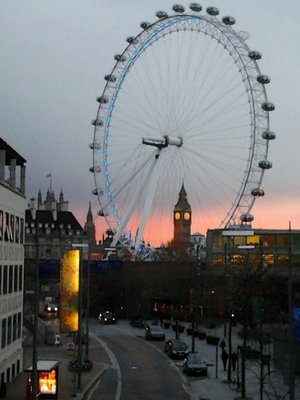 I never thought I would say this, but often the commute home can be a great balm for a hard day when the commute looks as beautiful as that.