A Reflection on 10 Years on the Road

The sun is high in the sky, reflecting off the Detroit river as I sit outside enjoying lunch on the steps of The Riverfront Promenade just outside the Renaissance Center in downtown Detroit. It's a beautiful day in the summer of 2007, and sitting on these steps make me think about to a beautiful day 10 years early, in the summer of 1997, when I was in about this exact same spot looking out on Detroit River.

On that day, I had wandered down from the cramped conference room full of consultants to get some air and some perspective. Back in 1997, the area along the riverfront outside the Renaissance Center was a parking lot, and I had to weave my way between cars to reach the water's edge. I had just started travelling for work, and was seriously questioning my ability to spending 4 days a week on the road. "Could I see myself doing this 2 years from now?" I asked myself. The answer was no. I'd do it for a bit, and then get out, get a job that kept me in Toronto and at home. 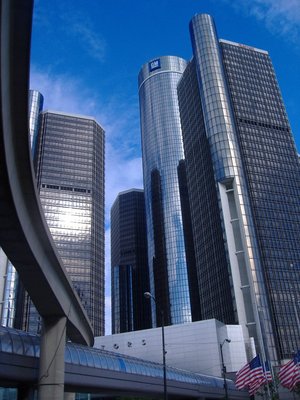 In July of 1997, I left my job as a computer programmer at one of the big banks in Toronto to join a management consulting firm. Management consulting, for those that don't know, is (according to that fount of knowledge Wikipedia), "the practice of helping companies to improve performance through analysis of existing business problems and development of future plans," which sums it up as well as any other description I've ever seen.

I work for a company that signs short contracts (usually 3 to 6 months) with another company to help them solve a specific problem. For me, this has mostly revolved around computer systems, and their application to customer care and marketing organizations.

Back in August of 1997, I got staffed on my first project. It was in downtown Detroit, working at the Renaissance Center, a series of 7 buildings located on the Detroit River. I wasn't so impressed with Detroit at the time. Back in 2004, when writing about my impressions of Detroit in August of 1997, I wrote the following:

Detroit is a weird place. During the day downtown Detroit feels like most downtown places. There are lots of people walking around in business suits, enjoying being outside on a quick break from their jobs.

However, as soon as 5 o'clock hits, the entire downtown area clears out. The cars flee off to the suburbs, and leave downtown Detroit empty. The bad areas of Detroit seem to ring the city core, and thus people want to make sure they are on the other side of those areas before night falls.

This exodus leaves downtown Detroit eeirly empty. There are wide, 5 lane streets that you could lie in and nary a car to run you over. Restaurants shut down for the evening because there is no-one left in town to serve. It's like those movies where the hero wakes up and finds they are the only person left on earth.

Hardly an endorsement for the place.

As I stated, I was also a little wary of consulting. By mid-September of 1997, I was pretty sure I couldn't hack it. The travel was mind-numbing, turning the experience of getting onto a plane equivalent of catching the subway to work, all the magic of travel washed away. The hours were long, and the work was intense. By October, I had arranged with the company I was working at to station me in Toronto on a long term assignment instead of having me get on a plane every week.

It wouldn't last. Within a year and a half I was back working as a travelling consulting, a road warrior again.

Almost 10 years later, here in the present, I get assigned to a project in Detroit. It's not the same client as my last trip here in 1997, and I'm at a completely different management consulting firm than I was 10 years ago, but I am back in working again in the Renassiance Center, just steps from the Detroit River and in the heart of downtown.

A lot has changed in 10 years. Downtown Detroit is a very different place now. A new football stadium and baseball stadium have been built in downtown, replacing the older stadiums outside of the city core. Add to that the 3 casinos have opened up and the hockey arena (which has always been downtown), and the nightlife has greatly improved. A 5 story high attrium, called the Wintergarden has been added to the Renassiance Center complex, facing the river and letting out onto the The Riverfront Promenade, providing access to the riverwalk along the Detroit River. 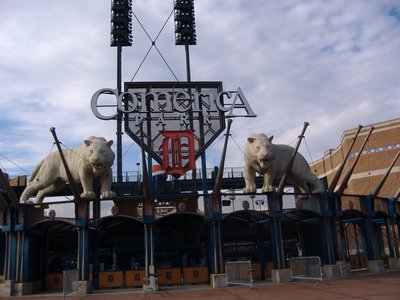 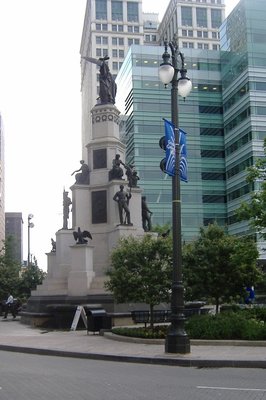 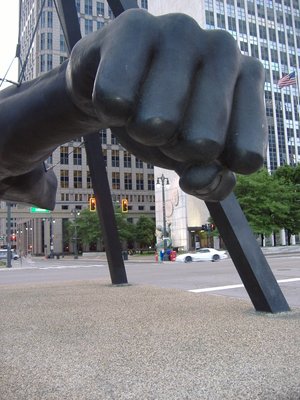 Statue of one of Detroit's most famous citizens, boxer Joe Louis. Well, at least a statue of his fist, which was really the most impressive part of him...

Detroit is a city that has had some hard times (and probably has a few hard times ahead of it, given the amount of business that is associated with the automobile industry in the city), and the downtown core in 1997 reflected that, but 2007 brings a revitalized city. The spirit of Detroit has been restored, and I mean that both figuratively and literally.

The Spirit of Detroit is a large bronze statue created by Marshall Fredericks, located just a few blocks from the Renaissance Center at the Coleman A. Young Municipal Center. The 26 foot high seated figure who holds in his left hand a bronze sphere emanating rays to symbolize God and in his right hand is a family group symbolizing all human relationships, was recently refurbished in 2006 at a cost of $100,000. 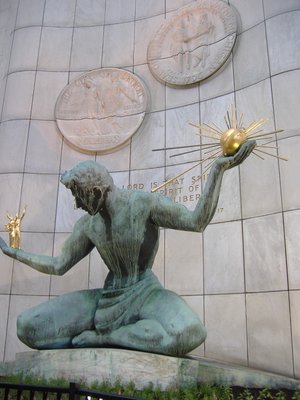 So too has my own goals and dreams changed in the 10 years since I last stood on the banks of the Detroit River. Back then I wanted a big house and a fancy car and a high paying, powerful job. I dreamt of vacations at a cottage north of Toronto. And I knew that I didn't want to travel all the time for work.

Now in 2007, I'm happy with my rental apartment in downtown Toronto, sold my car last year because I never used it, dream of vacations in faraway places and I still spend a better part of 4 days a week on the road, visiting clients and helping them "improve performance through analysis of existing business problems and development of future plans." 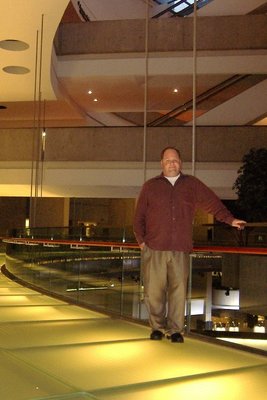 I look at myself 10 years on in this business, and I am older, probably a little fatter and definately have less in the way of hair on my head, and I can think to myself that 10 years has both made all the difference in the world, and 10 years haven't really changed a thing.