I may not be a man, but I am more than a mouse. Somewhere between mouse and cat, apparently, is where I fall.

I had lunch today with a friend of mine. We ate a hardy brunch, and afterwards had a cup of tea and a chat. We swapped stories to catch up on what we have missed in each others' lives, I mentioned that the previous night I had head down to the local pub for dinner.

"I headed over to the local pub, the Fox and Hounds, for some dinner. I walked in, and the place was jammed packed. Much busier than I had ever seen it on a Friday," I said.

"So you go there often," my friend asked.

"Well, I don't think they know my name," I confessed, "but they do know me by sight."

"Yup, I guess I am now a regular," I replied. That made me surprisingly happy. Always nice to have a local pub, I think.

"Anyway, the rain was chucking down," I continued, "so no one was out in the beer garden. Instead, everyone was inside. When I walked in, I didn't see a table open, but after a few minutes, I found a small table with one chair open in a quiet corner. I put down my copy of the Evening Standard and hung my jacket over the chair. I then went up to get place my dinner order and get a pint of Sambrooks."

I took a sip of tea, pausing for dramatic effect... or perhaps just pausing to take a sip of tea. However, dramatic effort sounds much more impactful, so we shall say that was the reason.

"After my order was placed, and my pint poured, I returned to my seat, and it was taken," I said.

At this point, I shall mention that the Fox and Hounds (Battersea) has a resident mouse catcher and otherwise fuzzy habitant in a the form of a black cat. The first time I ever went there - the day I moved in - the cat jumped up on the seat opposite me when my food arrived, and stared at me for the entirety of my meal. Reminded me of my flatmates from University, who used to sit on the floor, staring at you while you ate delivery pizza and occasionally saying things like "what toppings did you get" or "are you going to finish that WHOLE pizza?"

Anyway, in the many times I have been to the Fox and Hounds since that time, the cat and I have bonded. At least, I say we have bonded, but I really mean that in the feline sense. By that, I mean that I try and get the cat to come around, and the cat basically ignores me unless I have food, in which case it eats the food, scratches me, hisses, and then moves on.

So, back to the day before today, and the story I was telling my friend. My seat was taken, and by now you might have guessed by whom.

Photo not taken by me, but this is what I found staring at me when I returned to my table

"The damn cat had jumped up on my seat," I said.

"Nothing," I admitted. "I stood and drank my pint until the cat decided to move on. After that, I sat down, and then my food came so I ate."

"So, you were out-manned by a cat," my friend said.

I stammered a defence, but ultimately, he was right. A cat stole my seat, and I did nothing about it. I let him sit there, smug in his feline superiority, until he decided to move on.

Out-manned by a cat. Shameful.

Should auld acquaintance be forgot, and never brought to mind ?

January 1st is such an arbitrary date for starting the new year. Granted, it is the first day of the month named after Janus, the Roman God who had two faces so could look to both the past and the future at the same time, however there are a number of more significant days that could be the first day of the new year. Either of the equinoxes or the solstices, September 1st - traditionally around the start of school for children, or even sometime in April when the tax year starts. Heck, even personal new years’ on your birthday would make some sense, but January 1st? Random day, it seems.

Today, as I walked home along Elspeth Road after dinner back from a Chinese noodle house, I decided that is my personal New Year’s Day.

I didn’t just decide on today randomly. For me personally, today is not without any precedent for the switch of a new year. It was three years ago today that I landed at Heathrow Airport and entered London as a new immigrant. Therefore, it is the anniversary of a new period of my life.

Not only that, but I have recently moved house, and now live in a new place. So not only the anniversary of my new life, but a new place and a house warming to celebrate.

So I took a quick detour to the local wine shop, and picked myself up some bubbly to celebrate. 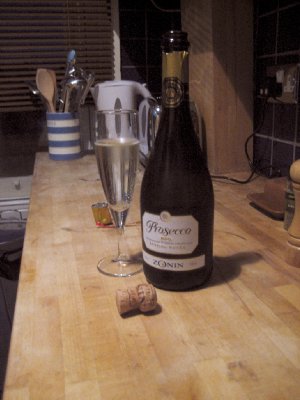 So Happy New Year, all, and I shall take a cup of kindness yet, for auld lang syne.