Tonight, July 12th 2005 was the night of the baseball All-Star game. I went out to a La Cage aux Sports (a local sports bar chain here in Monteal) to watch. A plate of chicken wings and a few pints of Heineken later, and the All-Star game starts.

La Cage is playing the game in French, but that’s not too disconcerting for me. Heck, I have watched 2 Superbowls in Spanish after all. This is just an All-Star game and, despite that big banners out in center field announcing that “this one counts,” in reality it doesn’t count that much.

I have been in Montreal for 10 weeks now, and have started to learn some French. Really, it’s more like re-learning. I took 7 years of French in school, and according to all “official” standards, 7 years of study should make me bilingual. But, because I never use my French, I would call me about as Bilingual as a unilingual inanimate piece of stone. However, a few weeks ago I realized that I could understand the numbers again. And just this week, I completed a whole restaurant transaction in French without the server getting upset with me and switching to English.

This evening, at La Cage, for some reason the waitress kept speaking to me in French. What makes this so strange, really, is that 90% of patrons in the bar were speaking English, and the waitress was all speaking English to them. Perhaps it was because I would keep saying “merci” and “une autre, s’il vous plait” that she felt like she could speak her native tongue to me. Not sure why, but French kept coming my way tonight. I would understand about 25% of it. Which, given that I knew the context of the transaction (most likely “would you like another beer” or “I’m sorry, you are too drunk to be served any more”), I was pretty good at deciphering.

I have recently staggered back to my hotel. Getting into the elevator I was joined by a family. They were Scottish, and if I know my accents, from Glasglow. They were talking to each other in the elevator, and God help me if I didn’t understand but 3 words they said to each other. I knew they were speaking English, but I had much more luck understanding my French bartender than I did my Glaswegian elevator companions.

P.S. I was in the bathroom and they had a very fancy urinal in there - it was a stainless steel trough with a large stainless steel wall with water running constantly down it. Very fancy. When I was at the urinal, a man came in asked what I thought of the urinal.

He laughed. "Does that make you Piss-caso?" he asked. 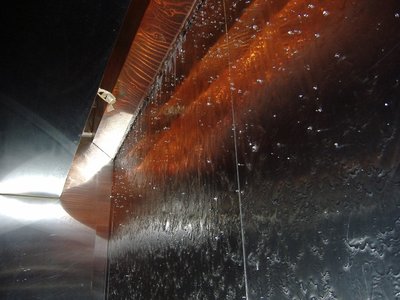