A sight few others have seen...

Starbucks in the Forbidden City no-more

Earlier this month, the New Seven Wonders of the world were announced. They are:

I wrote about a similar list last year done by ABC and USA Today, but unlike that list, this one was voted on by the general public - at least those with mobile phones or internet connections. It's already caused quite a stir, some claiming that it's just a list of tourist sites, and not really a list of "wonders." The inclusion of places like Chechen Itza or the Colosseum ahead of places like the spectular Angkor Watt is seen as many as proof that this was no more than a popularity contest. As proof, they offer that last minute bloc voting by Brazilians to get their statue in Rio in the list.

However, I don't think we can be sure that the "original" list of the 7 wonders of the world was something that wasn't of a similar bent. The best known and oft-quoted seven wonders of the ancient world was written by Antipater of Sidon, a writer of the 2nd century bc and author of a travel book, and supposedly were called originally the seven "theamata," which means "must-sees," so I am not certain that the original list should be considered any better than a potential tour pamphlet by a Hellenic Lonely Planet writer.

Anyway, it is what it is. Of more interest to me this week was the news that the the Starbucks in the Forbidden City in Beijing, China had closed. The Forbidden City (or Imperial City as they call it in China) is China's most popular tourist attraction, it originally was the palace that served as home and seat of power of the Emperors of China prior to the end of imperial rule in 1911.

The coffee shop has been a source of protest since it opened in the year 2000. The protest got louder this year when China Central Television anchorman Rui Chenggang suggested that the coffee shop was ruining Chinese culture. Soon, millions of people were supporting Chenggang's online petition.

Starbucks and the Forbidden City management are both claiming the protest wasn't related to the decision to replace the coffee shop with a unbranded cafe and shop, rather it was a "move is aimed at streamlining commercial activities and recreating the palace ambience."

All this means, of course, that I was one of the few people who actually got to see the American super-chains quick and unsuccessful time in the Forbidden City. I was there in 2005, and even wandered into the Starbucks to check it out, though I didn't buy anything. I did purchase an ice-cream bar and Coca-cola from a shop nearby, though. 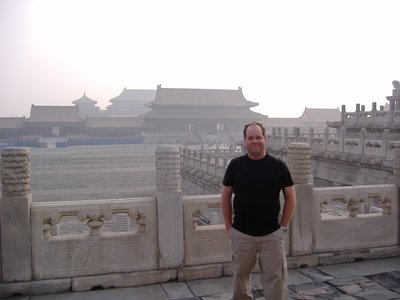 7 million people a year visit the Forbidden City. The Starbucks operated for a total of 7 years, which means that 49 million people passed by that Starbucks. No more people will ever do that. We 49 million, a mere 0.6% of the population of the earth, and the only ones that got that opportunity. We are a unique group. How many people can say that?

From now on, people will just have to go into one of the other stores that existed close to the Starbucks, buy a Coca-cola and an ice-cream bar, and reflect on how much less commercial and western-influenced the Imperial Palace is without the Starbucks.