The A to Z of London

Wayfinding my way through the streets of London

When I first arrived in London, I got lost.

London's street layout has not changed much since the medieval era. They twist and turn, and there are many narrow little walkways and alleys to go down. I'd start out walking down a street, thinking I am heading east, and wind up heading off to the north, coming out somewhere completely unexpected. 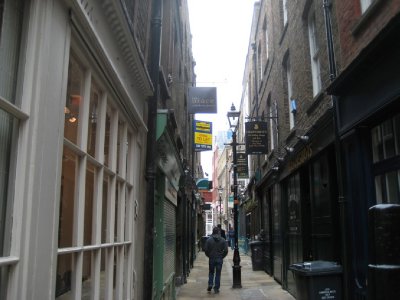 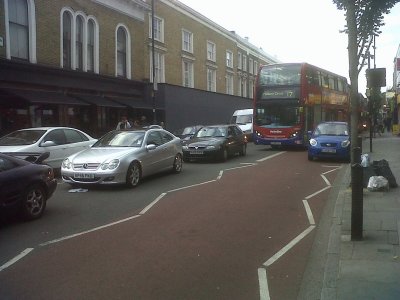 Traffic in Islington on the Cally Road

Now getting lost in a new city is good fun, but if you are trying to make a life there, and get to appointments like job interviews or medical appointments, trying to find your way through the new streets in the quickest and fastest way possible without getting lost becomes important.

I went into a local shop and said I wanted a map of London.

I had no idea what he was taking about. "A map," I replied.

I shrugged and walked out. It was only later the same day when I was in another book store, looking up at the London section, that I realized what an A to Z was. 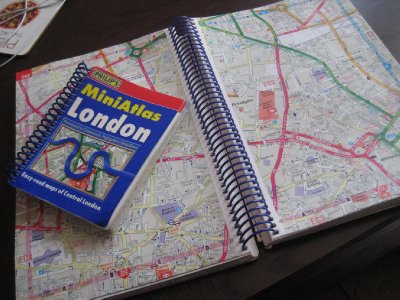 Little and Big A to Zs

The A to Z (or in its written form, AZ) is a street atlas, in a booklet form. Back home in Toronto, we would have just called it a map, but here it goes by the name AZ.

AZ (that's A to Zed, my American friends) was a creation of the AZ map company, designed by Phyllis Pearsall. Back in the 1930s, Phyllis walked London street by street to create the first AZ, and named the map after the index at the back, an alphabetic list of every street in the capital. It, of course, seems completely and totally logical that something like this should exist, but back then it was a revolution.

The AZ took off, so much so that the description "A to Z" has come to mean any booklet form map. I own two AZs, though they are actually Philip's Street Atlases. I have a pocket sized one that I could carry around with me when I was out on the streets, and a larger one that sits at home on a shelf to be consulted in the comfort of my abode.

I used to carry the mini one around with me constantly, and would often consult it. Unlike in Toronto (whose streets are an understandable and easily navigated grid), where someone with a map out would be pegged as a tourist immediately, here in London the long time Londoner would take no shame in pulling out their AZ. All those windy streets, changing names every mile, with lots of little streets off them that run for only a few hundred yards. No one could really know it all (except the cab drivers, who must obtain "The Knowledge" (an understanding of where every street in London is) before being allowed behind the wheel of a black cab). 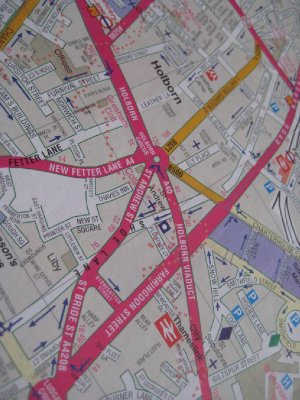 The AZ is such an institution, it inspires its fans. James May is a fan, as is Ham over at the London Daily Photo. The iconic east London blogger, The Diamond Geezer, has a whole series of A to Z posts, looking at the museums in the capital.

But the AZ is slowly disappearing. I stopped carrying my mini one around, and very rarely pull out the big one at home. It's been replaced, at home by the endlessly fascinating Google Maps, and out on the streets... 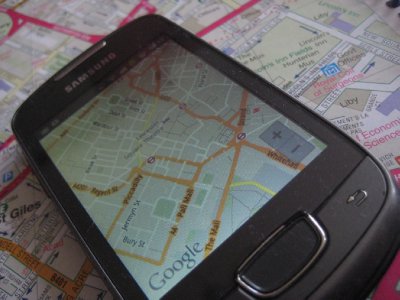 ..the smart phone with GPS enabled. No longer do I pull out my AZ and then go through the process of staring at the street signs trying to place myself in the map. Instead, I pull out my phone, click on the "map" app, and wait while it "locates satellites." (Has it ever thought of looking up? The sky is full of them.)

The physical AZ still does have a soft spot in my heart, even if it doesn't have a place in my pocket when I head out into the streets of London. Getting my first one, and pouring over it trying to learn my new city will always be a key part of my becoming a Londoner.

Pimm's and Strawberries at the All England Club

Seats in Court One

I talked recently about how I was starting to feel more British, saying that "now I feel that getting a British passport is not just a gateway to further adventure somewhere else, but instead I see it as cementing my position here in the UK. It is about giving me the paperwork to match with my feelings - that London is now my home."

If there is anything that demonstrates this, it is the fact that a few weeks ago as the weather turned nice, with the sun coming out and the weather increasing, I thought to myself, "I could really go to a Pimm's." 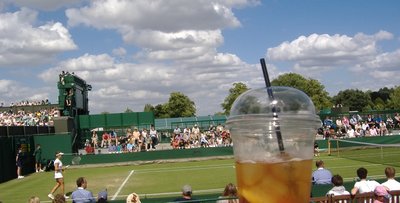 Pimm's Number 1 Cup is a gin-based drink spiced with various spices and fruits. It is most often mixed with English lemonade (a clear, carbonated lemon-based drink, like Sprite or 7-up for my North American friends), along with various fruits, cucumber and mint.

When I first tried Pimm's four years ago when I first got to the UK, I was not impressed. I have my first taste watching the tennis at The Championship at Wimbledon, and said, "I'm not really sure what Pimm's is, but it was a brownish, cold liquid poured into a cup with ice, mint and a slide of lemon and lime. It tasted a little like cold tea. I don't mean iced tea. I mean hot tea that has gone cold. Like all strange, foreign foods I don't know, it was worth trying, and then it was worth switching over to beer."

I now, however, have turned around on Pimm's, and now often enjoy one when the sun comes out and London heats up. It is a decent summer drink for picnics, patios or any other outdoor lounging activities.

So when I was recently invited to again watch the tennis at the All England Lawn Tennis club (aka Wimbledon), I was looking forward to having a glass or two of Pimm's.

My friend and I packed a lunch instead of depending on the often pricey food and drink at Wimbledon, which included handy pre-mixed cans of Pimm's, along with hard-boiled eggs, cheese, onion and cheese pasties and fresh strawberries.

The weather reports for Saturday were up and down all week, but once we arrived at the day the sun was out, but the air had a touch of a nip and a good breeze which kept it cool.

We had passes to Court One, which despite the primary numbering is the second best court in the championship (behind Centre Court). The order of play for the day was one women's match and two men's matches.

First up was Petra Kvitova, the 2011 Wimbledon champion on the women's side, who easily beat her opponent Lepchenko. We watched the first set and a half, and when it was obvious it was heading towards a rout, we exited and enjoyed our packed lunch.

Next up was Japanese Nishikori versus Argentinian Del Porto. The crowd was behind mostly Nishikori, who put on a spirited fight and took Del Potro to a tie break at one point. In the end though, Del Potro was too strong and big for Nishikori and Del Potro moved through. 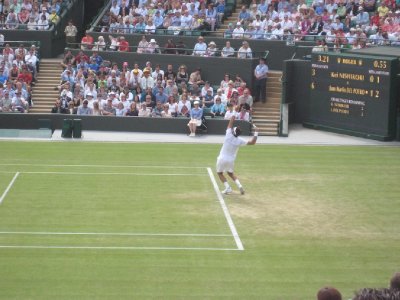 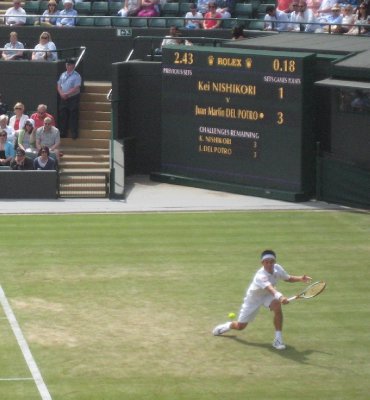 Nishikori Stretches for it on Number 1 Court, The Championship, All England Lawn Tennis and Croquet Club, Wimbledon

Another break, and so we headed out for Ice Cream. Pricey to purchase on the site, but a good on a warm day.

Back to the action where Tsonga, currently the 6th ranked player in the World. He faced up against Slovakia's Lukas Lacko. Tsonga was strong, and easily defeated Lacko. At the end of the match, Tsonga leaped and twirled around the court at the win, moving on to next face Mardy Fish. 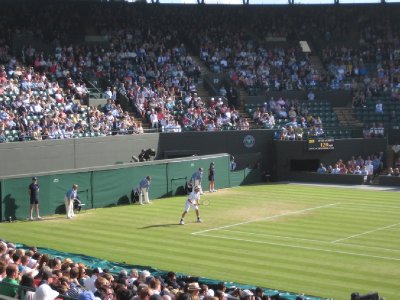 Lacko waiting for serve from Tsonga on Number 1 Court, The Championship, All England Lawn Tennis and Croquet Club, Wimbledon 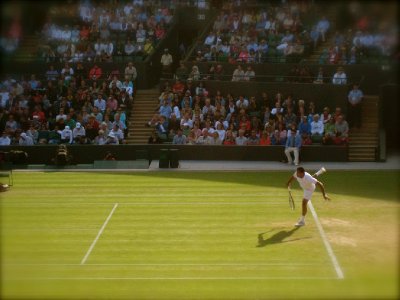 The shadows were then getting long, and dinner was calling, so we moved on, leaving behind the tennis.

On Centre Court, two long matches earlier in the day meant that British hope Andy Murray was just getting started, a match that lasted until just after 11:00 PM, meaning that after having dinner and a stroll, made it home to see the final end of the match. 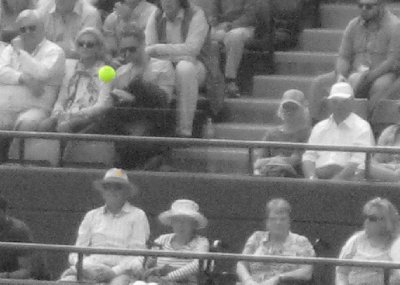 Balls Up on Number 1 Court, The Championship, All England Lawn Tennis and Croquet Club, Wimbledon

Four years after my first trip to Wimbledon, and a different experience than last time. Seated tickets instead of general admission, full matches instead of wandering around and watching sets here and there, and an enjoyment of a few glasses of Pimm's.