The Global City versus This Other Eden

Reflecting on the romantic notions of the immigrant for the land they are embarking for... 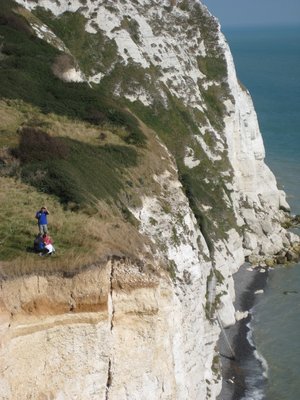 This royal throne of kings, this scepter'd isle,
This earth of majesty, this seat of Mars,
This other Eden, demi-paradise,
This fortress built by Nature for herself
Against infection and the hand of war,
This happy breed of men, this little world,
This precious stone set in the silver sea,
Which serves it in the office of a wall,
Or as a moat defensive to a house,
Against the envy of less happier lands,
This blessed plot, this earth, this realm, this England.
- Richard II, William Shakespeare

I recently read The Global Soul: Jet Lag, Shopping Malls, and the Search for Home by Pico Iyer. In the book, Iyer examines the experience of voluntary migrants and constant travellers in our increasingly connected world. Iyer calls these people Global Souls, and looks at how our sense of self, sense of place and even the physical places we inhabit are impacted by these global souls.

A number of things struck me when reading the book, some of which will no doubt find their way into blog entries here. As a start, I have been doing some thinking around the chapter called The Empire.

This chapter is about the experience of people moving from former British colonies to England. He talks of how people, like Iyer’s parents who moved from India to the United Kingdom, come with certain expectations, built up from years of having an English school education (though provided in India) and hearing of the green rolling hills and rolling seas from Tennyson and Wordsworth. They develop romantic visions of a land of impeccably dressed aristocrats punting on the Cam and gentle countryside. It is a land full of noble Englishmen, believers in justice, fairness and chivalry.

These visions are dashed as they arrive to find a place that is modern and international, full of all the problems and prejudices of any place.

I read the chapter, and felt completely perplexed by it. It wasn’t an experience I felt at all. I realised that I really had no romantic impressions of England when I arrived. While I have noticed many of the things about the English that those in Iyer’s book point out, I haven’t felt disappointed by that at all.

In a small part, I think that is because I never received an “English” education back in Canada, but rather one that was distinctly Canadian in the fact that it was a mash of American and English values and knowledge.

Mostly though, I think this boils down to the fact that I never wanted to, nor really feel that I have moved to England. I moved to London. It was not the romantic and historic images of Victorian manor house England that drew me here, but the modern urban and international reputation of London. What drew me was the city. This city, one of the alpha cities of our global world, at the heart of the global business and travel. A place where people come to live an international life. London is in England, but had it been in Germany or Chile or Cambodia, I probably would have been as happy moving there instead.

Perhaps this paints me firmly as one of Iyer’s Global Souls – those who pick up and move elsewhere, looking for a home “in the midst of the alien and the indecipherable.” I didn’t move to England looking to take on some new national identity, but rather to take on an international identity. I don’t want to be English and Canadian (or British-Canadian, if such a thing exists). I want to be global.

I must admit, for a moment I felt smug, better than those who come to England looking for a land of hedgerows and stone walls flowing endlessly across the moors. “How silly,” I thought, “to expect the reality of a place to be the same as the imagining of Victorian poets.”

Then I thought deeper about my own thoughts before moving to London. London seemed a perfect place to come and live this global dream. The world’s busiest airport, one of the centres of global finance and business, a landing point and destination for those from around the world. I envisioned a post-national, urban city state humming on the banks of the Thames. 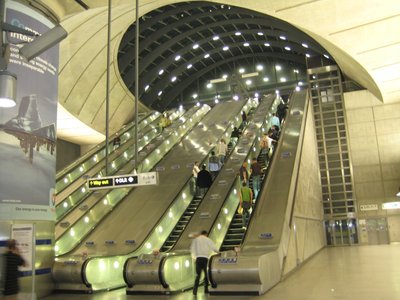 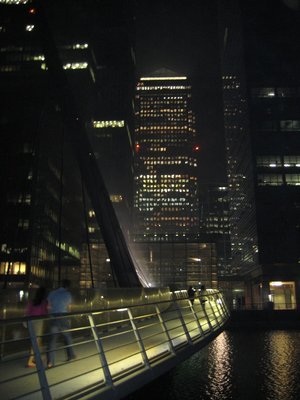 Where did these images come from? From the business pages of national newspapers and articles in the Economist. From travel articles and airline maps. From international thrillers by Robert Ludlum and Ian Fleming.

My visions of London were as romanticised as the vision of Iyer’s ancestors’ visions of England. My view of the city from afar as the centre point of an airline style map of the world, where millions of connections converge is probably as misconstrued of visions of England as punting on the Cam, manor houses and manners.

Now I have been in London for over two years, I have had my unrealistic, romantic visions of the place buried, and have adjusted to the reality of living here. The city does have an international flare, and sometimes wandering London’s streets can be like travelling around the world by foot. However, I have also come to accept that despite a desire to live globally, we all must live locally too. No matter how urban and international the city, there is still a physical place that is “home,” and there I wash my clothes and cook my dinner and have to vacuum the rugs.

On reflection, Iyer’s second last chapter, on England, has now grown on me. I see that it is a meditation on the baggage of expectation we bring to a place, and where that baggage can take you. You can, as one of Iyer’s friends, become bitter and disillusioned at the place and its failings to live up to the image in your head. Or you can, like most immigrants, set aside your expectations and learn to live in your new home.

I like to think that I am taking the second path. Setting aside what I dreamt, and learning to embrace the city wide awake.

A White Spider Writing On The Sky

The Outrace Installation in Trafalgar Square

Working is hard. You get up every morning, do your shift, endlessly repeating the same task over and over.

Why let that stop you, though. You dream of getting away. Maybe seeing a beautiful city. In one of your rare coffee (actually, a 5W30 oil) breaks, you read about folks who take holidays to paint, sculpture and create art.

So you and seven friends book a trip from Ingolstadt, Germany to London. 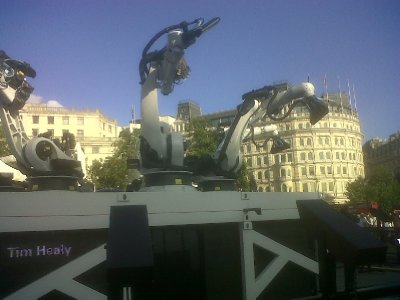 Eight industrial robots, usually used to build Audi automobiles, have been installed in Trafalgar Square by artists Clemens Weisshaar and Reed Kram. The Outrace installation, which was in place from September 16th to the 23rd as part of the London Design Festival.

At the end of the Robot arms are a set of LED lights, which the robots use to trace letters in the air. It's not possible to see the letters when looking at the exhibit in Trafalgar Square, but thanks to slow exposure cameras to capture the lights, you can go to the website, or Youtube to see the images. 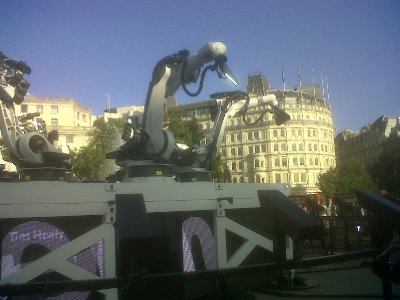 Website visitors could enter a message, and if picked by the robots, they would draw it out for you and send you a link. I put in three messages, and one of them got picked to be drawn.

If the robots are making the art, what are the artists to do? can be viewed at Youtube if you can't see the video above.

I liked my message, and think it decent and arty. Some messages, though, are priceless, like this one submitted by Gavin Olukoju from London.

Make your time, for the Robots are here! 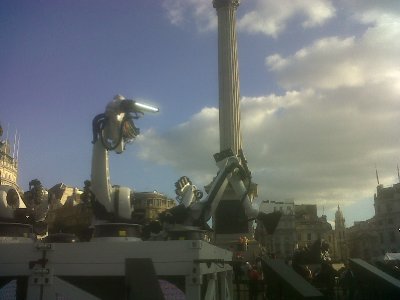 A day in Cambridge...

I went to Cambridge. Cambridge is the site of the famous and old University of Cambridge. Spent a day and a half there, and frankly feel no smarter for it. Perhaps you actually have to attend the University for your intelligence to improve. 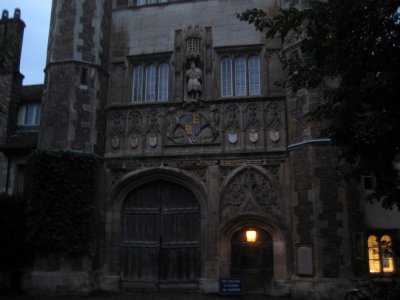 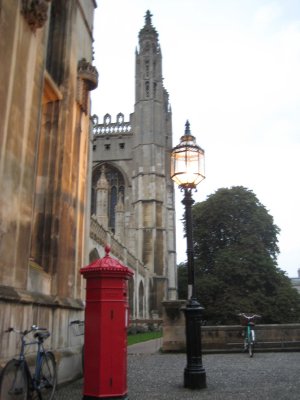 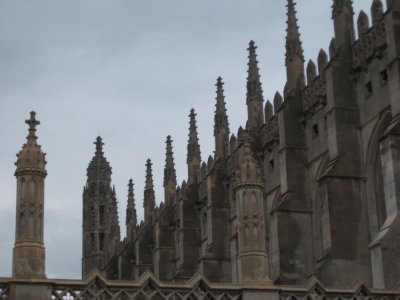 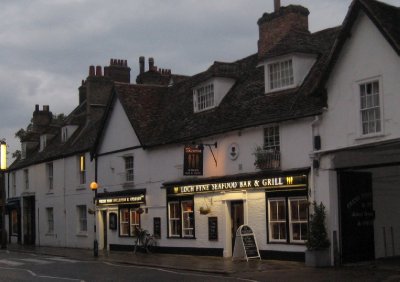 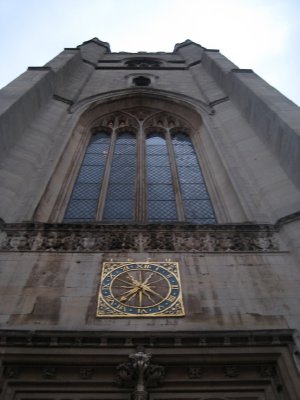 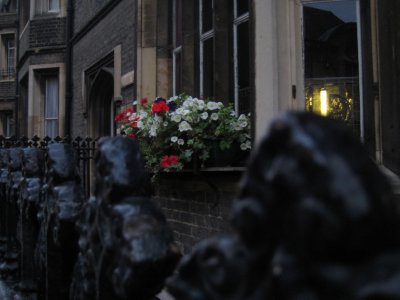 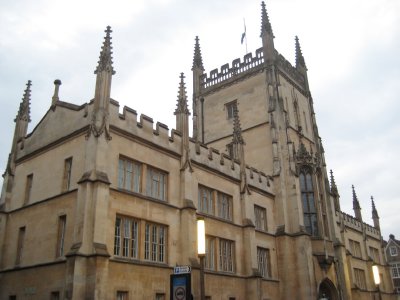 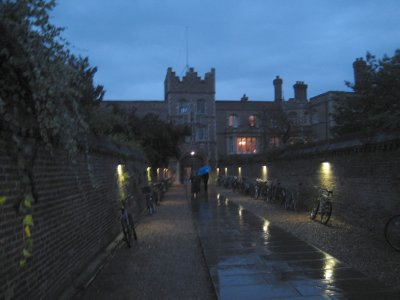 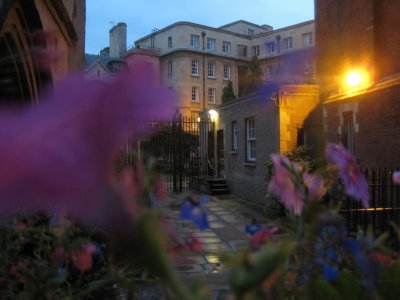 Flowers in the rain 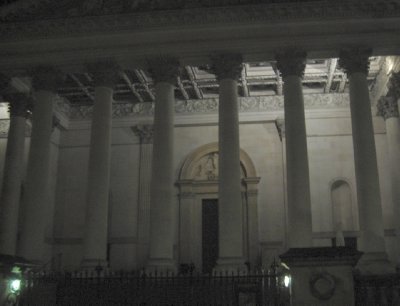 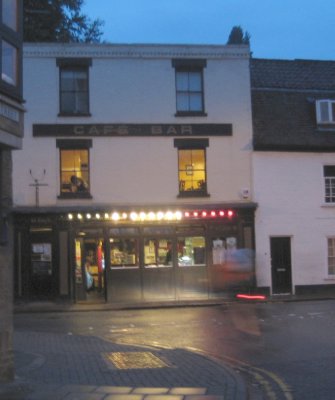 For reasons that can't be explained, the hotel I stayed in provided three rubber ducks for bathtime, even though my room only had a shower. Not much fun playing with your ducks in the shower... 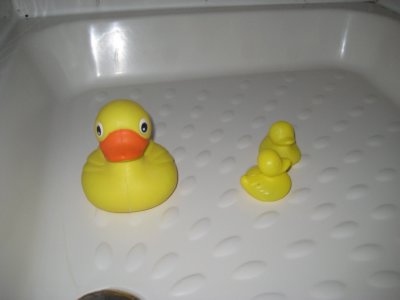 Rubber Ducky, You're the One!