Back in centuries past, when the winters in London were colder than they are now, and the River Thames less contained and fast flowing, the River would on occasion freeze over. When the river would freeze over, frost fairs were held on the frozen water. These fairs involved "sleds, sliding with skeetes, a bull-baiting, horse and coach races, puppet plays and interludes, cooks, tipling and other lewd places, so that it seemed to be a bacchanalian triumph, or carnival on the water," as described by writer John Evelyn.

The last frost fair was held in 1814. Milder winters, along with embankments being built along the banks of the river and the new London Bridge allowing the water to flow faster through its larger arches meant the river has not frozen over since. 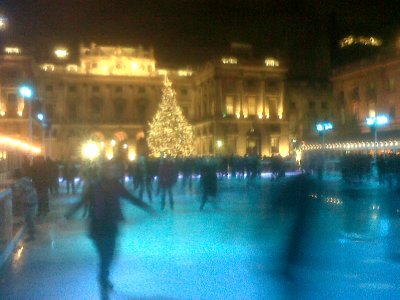 However, there still are opportunities to enjoy a touch of the frost fair in London. Each year Somerset House gives over a large portion of its courtyard to an outdoor ice rink. I went recently with a bunch of co-workers for an hour of ice skating. 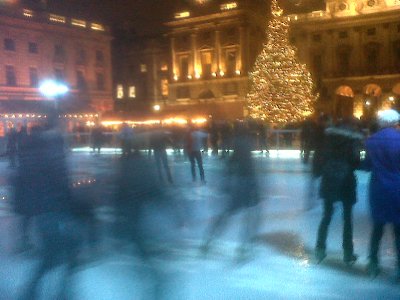 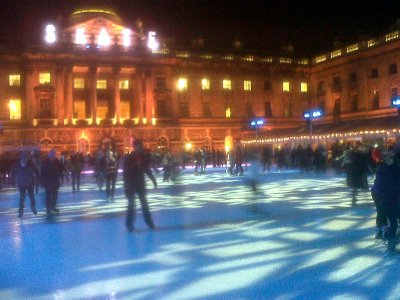 As a Canadian, I learned to ice skate at an early age. I wasn't ever really very good at it, though, and as compared to other Canadians, am a weak skater.

The great thing about skating in the UK is that most of them haven't ever been on skates, and are quite poor. Whereas on a Canadian rink, I look like a rank amateur, on an English rink I am in the top 10%! It's a real ego boost. I would recommend it for any Canadian living in the UK. 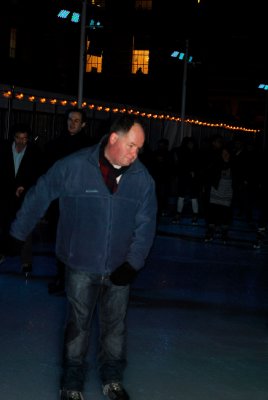 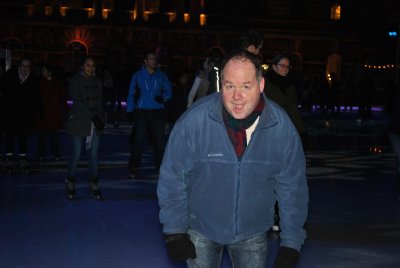 Not to say I'm by any means perfect. I did fall once, trying to stop a little to fancily in front of my coworkers. Bit of a wet leg after that... Oops. 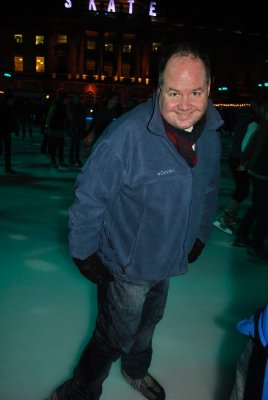 After falling, a bit of a wet leg, skating at Somerset House

But for the most part I did well on the ice. And it was fun to get out. 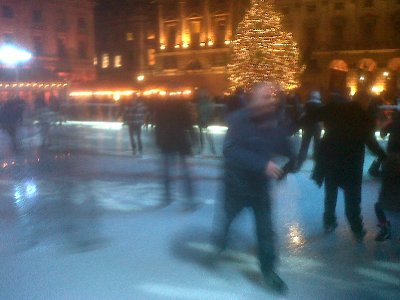 Action shot, me skating away, skating at Somerset House

I think I'll go again this year. It is a good workout, quite fun, and at £15 for an hour, cheaper than the gym.

I have been listening to a lot of Achtung Baby era U2 recently. It all started back when U2 played Glastonbury in the summer, and I sat on my sofa (slightly drunk) watching the set on the BBC. No doubt as a way to plug the masses of re-releases in honour of the 20th anniversary of that album, the band played a number of their Achtung Baby songs, much in the same way they played them back during their massive Zoo TV tour. That triggered me to start listening again to Achtung Baby, as well as the related albums I had - including Zoo Europa, an excellent bootleg from their 1993 Zoo TV concert in Dublin. Recently, though, I have turned off the music and on the TV so I can watch the coverage of the austerity measure debate in Italy. This is expected to trigger the resignation of Silvio Berlusconi, Italian Prime Minister, who has held the office for 9 years over three separate periods.

Berlusconi's leaving office is just the latest in the ongoing financial crisis that is gripping the Eurozone, the larger EU and the world as a whole. The European Union and Eurozone is attempting to resolve these issues and save the Euro and the currency union, but more and more commentaries are saying that at least some of the Eurozone members will have to leave the currency union. Herman Van Rompuy, President of the European Council, has said any members leaving could lead to the complete disintegration of the European Union as a whole. Germany, as the strongest economy in the Eurozone, is being pressed to put in trillions of Euros to save the entire project. Germany, however, is balking at pouring too much money into saving the Mediterranean economies. 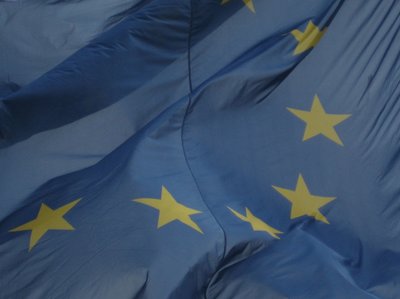 It is a very different picture that I had when I first got here. Just three years ago, despite the economic troubles which were gripping the banks at the time, I was quite excited about the continuing integration in Europe. In a blog entry at the time, I wrote:

As I left North America, Canada and the USA seem to be closing themselves off, fortifying themselves against the outside world and even dividing themselves into smaller bits internally - red vs. blue states, north vs. south, Quebec vs. the rest of Canada, east vs. west, Northern Ontario vs. Southern Ontario.

Europe is coming together. The European Union is growing, the coming together of nations to form a larger community, an international meeting place. Despite setback with the recent Irish rejection of the Lisbon Treaty to give the EU more powers, proponents of the EU want to continue to build the union, stronger and larger.

Ummm... Then again, perhaps not.

Three years, and all change. Now it appears Europe is slowly rending itself apart, and while it doesn't appear that things have changed in the USA, Canada's economy is strong and it, among other emerging economies like China, India and Brazil, were asked if they would lend additional support to the Eurozone. Canada, along with the others, offered "support," but no clear new money.

Achtung Baby was recorded (in part) in October 1990 in Berlin. The band had gone to Berlin to find some sort of inspiration on the eve of German reunification. The European Economic Community morphed into the European Union just a few years later, and in 1999 the Euro entered the financial markets. 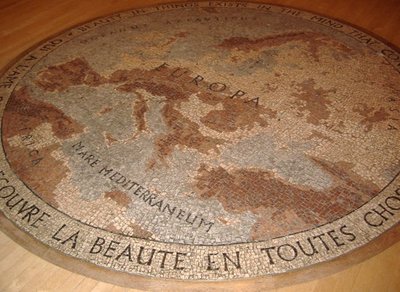 I remember going to buy Achtung Baby in 1991. At the time I was in university, and had remembered watching the European wall fall, the reunification ceremonies for Germany on TV and the ongoing "end of history" events as Europe - formerly a continent torn in two by political divisions - was coming together. Achtung Baby formed the soundtrack of my watching the ongoing European integration from afar, as they signed the Maastricht Treaty and became a more integrated union.

Now, 20 years later, its re-release is forming the soundtrack of my watching Europe potentially fall apart, this time from much closer than my university in Canada. I watch now not just as someone interested in world politics, but someone whose job depends in part on the ability for companies within Europe to buy my services.

It is strange and beautiful music for strange, strange times.