Riding north from Amsterdam, Netherlands and hitting the wall

Perhaps one of the most liberal cities in the world, and a huge draw for tourists and backpackers for the laid back attitude, openly available red-light ladies, crazy sex shows, "coffee shops" selling marijuana and general crazy party atmosphere. Heck, I walked by one "after hours place" that opened at 7 in the morning and went to 2 in the afternoon. Now that's really after hours. 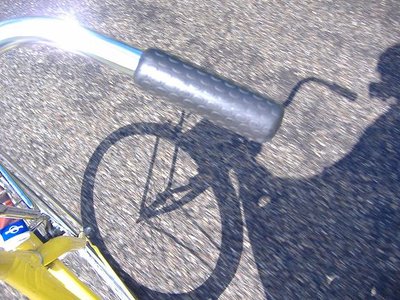 Waterland is the municipality located north of Amsterdam, on the borders of the IJsselmeer lake containing a number of small villages and a lot of open farm land. Waterland, like much of the province of North Holland which it is in, consists of land "reclaimed" from the sea. These areas are known as polders, which is a low-lying tract of land enclosed by embankments known as dikes. The dikes keep the water out, and pumps drain water out of hte area to prevent the water table within the polder from rising too high. In The Netherlands, many of these pumps are run by windmills, which is why you see so many of them there.

Amsterdam is really a pretty flat city, a trait it shares with Waterland as well, so it's a pretty decent place to get on a bike to get around. One of my travel mates had a Lonely Planet guide that suggested a nice, 3.5 hour, mostly flat 37 km ride through north of Amsterdam and through the mostly rural area of Waterland. There are so many bike places around Amsterdam renting bikes for 10 Euros for 24 hours, it seemed an excellent thing to do on a sunny but cool Friday.

The route was briefly described in the Lonely Planet guide with just a very basic map, and we didn't have a detailed map of the roads in Waterland, but I have a pretty decent sense of direction, so I figured we'd be fine.

We started out by catching the free ferry from behind Central Station that takes you across the IJ river to Amsterdam Noord. 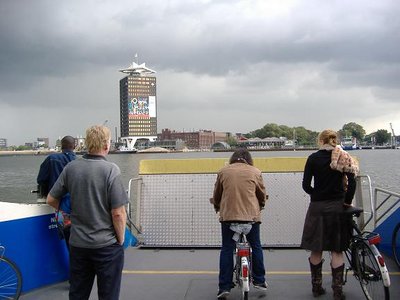 From there, the book described in two sentences the route out of Amsterdam Noord. Seemed simple enough, but turned out to be a little harder to follow. We soon found ourselves biking through an industrial area, sharing the road with semis and enjoying the sights, sounds and smells of oil refineries and fish rendering plants. Eventually, after a few false turns, we got ourselves back on track and out of town, heading on the Schellingwouderdijk and Durgerdammerdijk towards the small village of Durgerdam. Dijk is the Dutch word for dike, and probably where the English word originated from.

Durgerdam is a pretty small little village, a row of houses along the dike on the banks of the IJsselmeer. 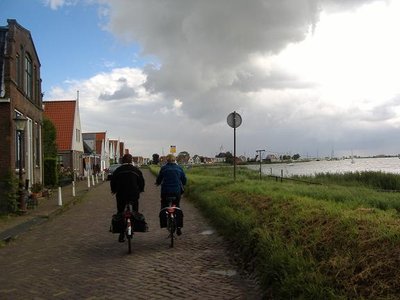 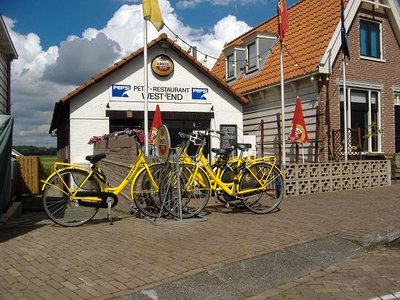 We stopped here, about 7 km into our ride for a quick lunch and some drinks at the West End cafe, a nice little place. I ordered a ham sandwich, which was two pieces of bread and a slice of ham, nothing more. Sandwiches very basic here, but the price was very good at only 1 Euro 30. After a quick break enjoying the sun and finishing my half-pint of beer, we headed back out on the road again.

From Durgerdam, we headed north along the dike road towards Uitdam. The sun was out, the wind was at our backs, and no part of me was aching yet, and it was a fine ride. And, as there was only one road, surrounded at many times by water on both sides, it was very hard to get lost. 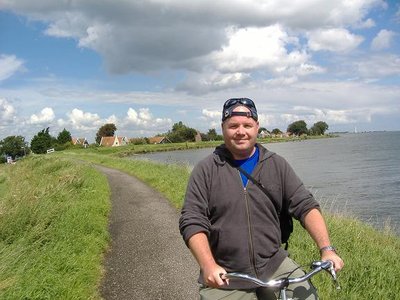 At Uitdam, the Lonely Planet suggested a detour further north to Monnickendam, but we decided to skip the extra bit and head directly west towards Broek in Waterland. This is where things started to come apart, really. As soon as we started heading west, the wind was in our faces. The bikes we rented were only one-speed bikes, and the one gear they had was not sufficient for me to keep up a steady pace in the wind. Soon I was lagging behind, frankly at a speed that I think I could have walked at faster.

My legs started to ache from the strain of pushing against the pedals, and my mouth was soon dry as a bone. I planned to stop at the first sign of a shop to purchase some water, but the only thing at the side of the road was grass and cows. I contemplated trying to draw milk from one of the beasts, but decided against it, as I understand that cows can kick. Instead, I suffered along in silence.

Now, those who are readers of some of the other bloggers on this site will recognize that my little 31 kilometer ordeal hardly stands up to the punishment of Gelli's recent 6 day ride with killer mountain climbing and all, but all pain is relative, and I was relatively sure I had hit a wall. My legs just couldn't move any faster, and I was reminded of my climb up Kilimanjaro right before I got pulmonary edema how slow I was moving. I started to wonder if there was some sort of low country sickness that I might be suffering from - a lack of altitude sickness if you will.

Of course, really it's probably just because I am out of shape.

The final insult, though, was my bottom, which was complaining bitterly about having to be forced to sit on the uncomfortable seat for so long. I tried shifting positions, but that just slowed down my already glacial pace, and standing was no good, because my legs, tired from the ride, were starting to shake with disapproval at the concept of bike riding. So my poor ass was forced to remain on the seat and ache in quiet desperation, like a good Englishman. 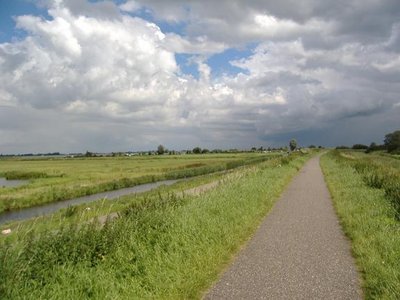 Anyway, I lumbered on to Broek in Waterland, where we found a cafe and I had a Coca-Cola Light. It was good, but everything here is served in such small bottles, I was done in two gulps, and we were off again.

Now, the Lonely Planet gets even more vague with its directions from Broek in Waterland, saying simply "its a straight shot down to Broek in Waterland to the ferry" (or something to that effect). It wasn't, though, such a simple task, especially seeing as we continually ignored the signs pointing the way back to Amsterdam and kept riding off in other directions. Eventually, after 3 more wrong turns, we finally figured out to slow down and read the well marked sign posts before charging off (plodding off, really, in my case), and finally found our way back to the ferry docks.

The approximate route we ened up taking was about 31 km, according to the mapmyride.com map I created.

We dropped the bikes back at the rental place, and then came my favorite part of the ride, the patio aftewards. 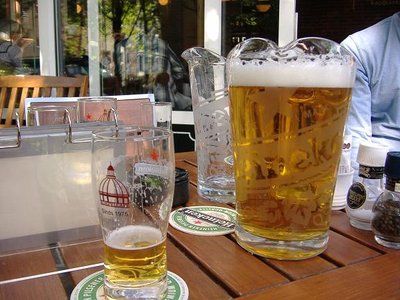 Yes, a couple of pitchers of beer, the sun shining, a cool breeze, a very comfortable chair (or at least much more comfortable then sitting on a bike seat) and everything in the world starts to seem right again.

If you choose to go on the ride, try and choose a less windy day, or get a bike with some gears so you don't have to struggle so hard against the wind. And, if you are feeling a bit peckish after the ride and want something to go with your well earned beer, may I suggest a nice herring sandwich? 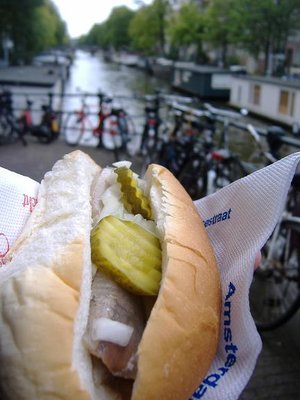 Really, nothing like a little oily fish to recharge the engine.