Recently I registered with a new medical practice around the corner from my flat. I should have done it back in February when I moved in, but I am a man and thus blissfully (some would say dangerously) unconcerned with matters of health generally. However, I finally got around to registering and was told that I needed to do more exercise. For some reason (perhaps advancing age or expanding waistline), I decided to listen and have actually been attempting to engage in regular exercise.

To meet my exercise requirements, I have been going out for brisk walks. Most days I just huff and puff along, not really taking in too much of my surroundings. Occasionally, though, I slow down the pace a little bit and take a look around. Today, on my partially brisk, partially leisurely walk, I wandered around Islington, which is the borough of London in which I live.

I started by marching up Caledonian Road. Cally Road, as it is known, is where I live. The southern part of the road, from Pentonville Road (near King's Cross) heading up to Caledonian Road tube station is a somewhat gritty street, mostly lined with shops. I don't mind a bit of grit, though, and the shops sure come in handy when I want the Sunday morning paper or need some dry cleaning done. Plus, there is a barber around the corner from me who charges £5 for a hair cut. That's a damn fine deal. 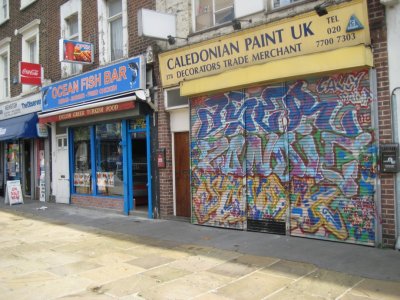 Just to the west of Caledonian Road tube station, off Market Street, is Caledonian Park. The park is built on the former site of the Metropolitan Cattle Market. The Market, in operation from 1855 until the early 1900s, was located on the site due to the proximity of King's Cross rail station, where cattle were offloaded from trains and marched up York Way. Today the only remnants of the cattle market are the clock tower that stood at the centre of the site, and a few pubs around the edges that date back to the period.

The clock tower is a listed building, and is "Baroque influenced." It was designed by J.B. Bunning, architect to the Corporation of the City of London. 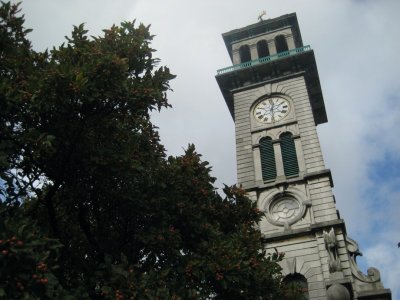 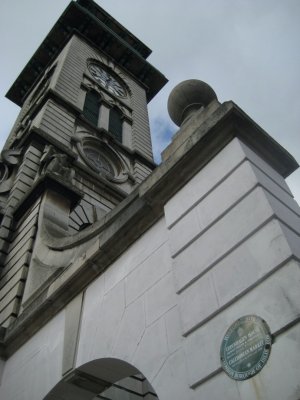 In the 1800s, the area stretching from Regent's Canal (just north of King's Cross station) up to Caledonian Park was known Copenhagen Fields. It was across the Copenhagen Fields in 1834 that a demonstration and march took place to show support for a group of men known as the Tolpuddle Martyrs. The Tolpuddle Martyrs had been convicted of trying to organise a trade union, and for that had been sentenced to seven years in Australia.

On April 21st 1834 (175 years ago this year), demonstrators marched pretty much along the route that I had taken to get from my flat to Caledonian Park, starting at what today is Wharfdale Road (just north of my flat) and ending at the park. They would have gathered on the flats by the tower, though the tower wouldn't have been there at the time. 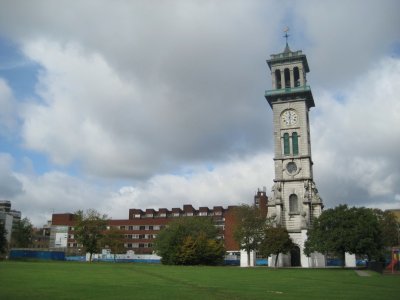 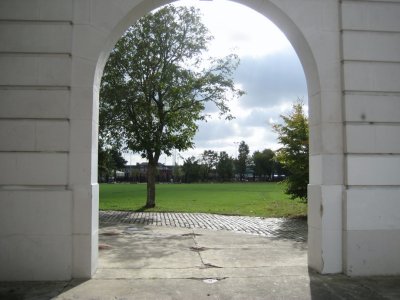 Today there was no union demonstrations in the park, just a couple kids playing in the play area and another boy playing fetch with his dog. Well, half a game of fetch. The boy would throw the stick, the dog would run after it, sit down by the stick and start gnawing on it. Then the boy would throw up his arms and walk over to the dog, wrestle the stick away, and throw it again. The dog would then bound after it, and upon arriving at it, sit down and start chewing the stick again. In this way, the boy and his dog circled the park.

Judging by the black spot on the grass where a scooter had been burnt a few days before and a lot of posters along Market Road warning drivers that they are being captured on CCTV, so they shouldn't kerb crawl, I'm guessing it probably isn't the nicest area at night. 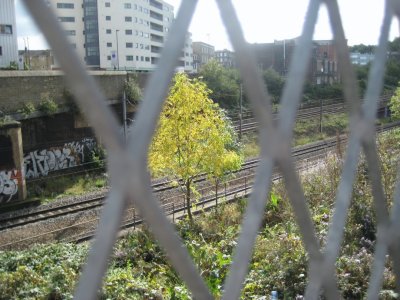 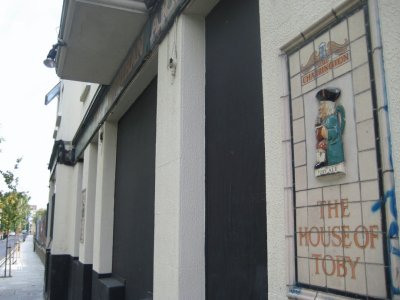 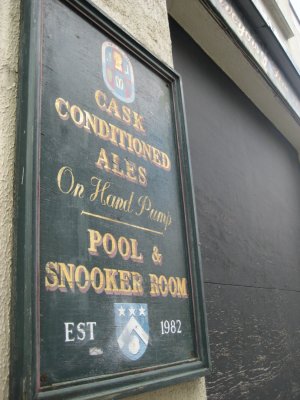 However, things look set to change. Just north of the park is the Market Estate, a council estate that is getting a big face lift. In 2001, after the death of a young boy on the estate due to a faulty security door, the residents of the estate formed the Market Estate Tenants and Residents Association (METRA), which demanded changes. After 8 years, they are getting the changes they wanted, with a redeveloped estate being built. 175 years separate the six Tolpuddle Martyrs from METRA, but the two stories both show how those who band together to make their lives better can effect change.

Ironically, a lot of the drug activity and prostitution in the area is due to the activity being shifted away from the regeneration around King's Cross station. As I said in a previous entry, I'm part of that gentrification of the area, so I guess I am partially to blame for the Market Estate's woes.

Heading east from the Market Estate one gets into Highbury. Highbury is much poshier than the area around Caledonian Road, with lots of nice row houses and the much larger and less-scooter-burnt Highbury Fields park. 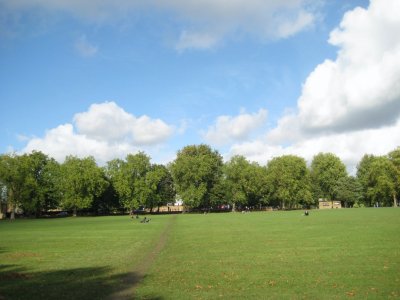 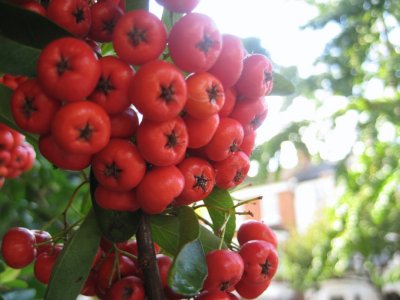 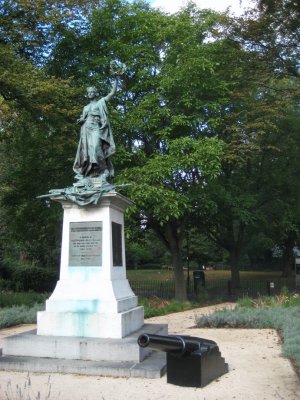 Running south from Highbury Fields is Upper Street. It runs parallel to Cally Road, only a few minutes away, but they feel miles apart. While Cally Road is all discount shops, low-end grocers and betting parlours, Upper Street is gastro-pubs, funky little clothing and furniture vendors and fancy restaurants. On Upper Street is Islington Town Hall. Today, as with most Saturdays, folks dressed up in nice clothes were milling about outside taking pictures, guests of weddings taking place in the Town Hall. You don't get many people dressed up for weddings on Caledonian Road. 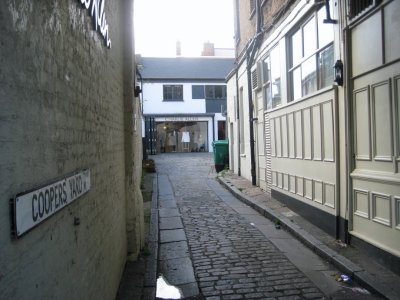 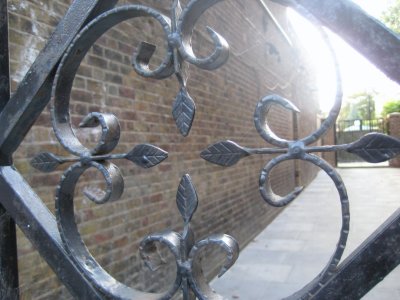 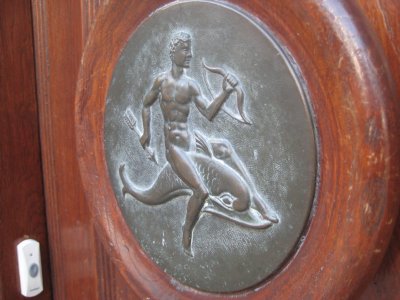 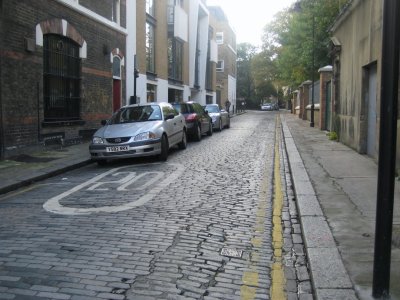 That was my walk today. Heading north on the working-class, council-estate-surrounded Caledonian Road, and back down the posh and fancy Upper Street. The two roads are never more than a few minutes away from each other, but feel very different. I like having them both close at hand. It allows me to immerse myself in different atmospheres and experiences depending on my mood, all without having to walk too far from home.